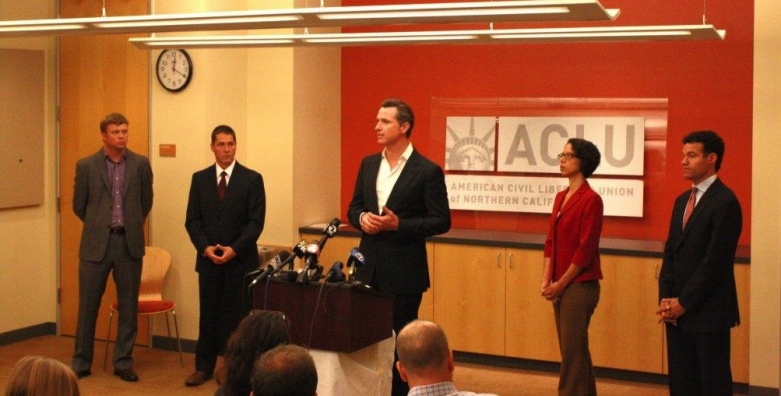 San Francisco – The ACLU of California announced Thursday that Lt. Gov. Gavin Newsom will chair a blue ribbon panel that will study the complex legal and policy issues that must be resolved as California considers legalizing, taxing and regulating marijuana for adults.

Comprised of leading legal, academic and policy experts from across the state and nation, the blue ribbon panel will engage in a two-year research effort. The panel’s work will be designed to help voters and policy makers evaluate proposals for a strict tax and regulation system that will enable California to benefit from billions of dollars of new revenue while ensuring safe communities and protecting against underage use.

Recent successful marijuana legalization ballot initiatives in Washington state and Colorado, and growing public support for such reform in California, indicate that a similar measure could succeed in California.

“The prohibition of marijuana has had an enormous human and financial cost in communities across this state,” said Newsom, the highest ranking elected official in California to publicly endorse taxing and regulating marijuana for adults. “It is far past time for Californians take a serious look at smarter approaches to marijuana, and it is imperative that happen before any marijuana ballot initiative gets underway.”

The ACLU Thursday also released results from a fresh poll conducted in the past two weeks by Tulchin Research which shows ever-growing support for taxing and regulating marijuana among likely 2016 California voters across political, racial and geographic lines.

The poll results make clear that voters offer strong support for legalizing marijuana when it is coupled with a comprehensive regulatory system and an ability to collect revenues to fund public services. Specifically, nearly two-thirds (65 percent) of voters support a proposal to legalize, regulate and tax marijuana in California for adults.In fact, nearly half (46 percent) of voters strongly support such a sample measurecompared to less than a third of voters (27 percent) who strongly oppose it.

The proposal put to the 1,200 respondents likely to vote in November 2016 makes it clear that marijuana would still be illegal for minors and that there would be penalties for DUI. The sample measure also references the revenue that would be raised with a tax and the types of services that might be funded. When all of this is put together in a ballot measure, the poll finds strong support for legalizing, regulating and taxing marijuana across a wide range of demographic groups.

Joining Newsom on the panel is a broad spectrum of policy, legal and academic experts, including, among others, Keith Humphreys, a Stanford Health Policy Associate who was a senior policy analyst at the White House Office of National Drug Control Policy in 2009-2010, Erwin Chemerinsky, constitutional law expert and dean of the University of California, Irvine School of Law, Dr. Timmen Cermack and Dr. Peter Banys, both past presidents of the California Society of Addiction Medicine, Dr. Seth Ammerman, a Stanford University professor and member of the American Academy of Pediatrics, Santa Clara County Sheriff Laurie Smith, Sam Kamin, a Denver University law professor who has been appointed to the Colorado governor’s task force for implementing that state’s marijuana legalization initiative and Alison Holcomb, campaign manager of Washington state’s successful 2012 ballot initiative to tax and regulate marijuana.

The panel will spend the next 18-24 months monitoring and analyzing the implementation of tax and regulate laws in Washington and Colorado, publishing a series of policy white papers, convening round-table discussions, panel presentations and town hall events for the public and for policymakers across the state.  The panel will also seek to identify, research and propose answers to the legal and policy questions that these public forums will address.

An ACLU report released in June showed extreme racial disparities in marijuana arrests throughout the country and in California, disparities that would be erased by sensible tax and regulate measure.

“Marijuana prohibition has harmed communities and families by needlessly ensnaring hundreds of thousands of people in the overburdened criminal justice system, with people of color far more likely to be arrested and prosecuted,” said Allen Hopper, director of criminal justice and drug policy for the ACLU of California. “California voters recognize that it’s time for change and will overwhelmingly support reforming marijuana laws provided it can be done responsibly with adequate safeguards and assurances that tax revenues will go to fund public schools and other important social services.”