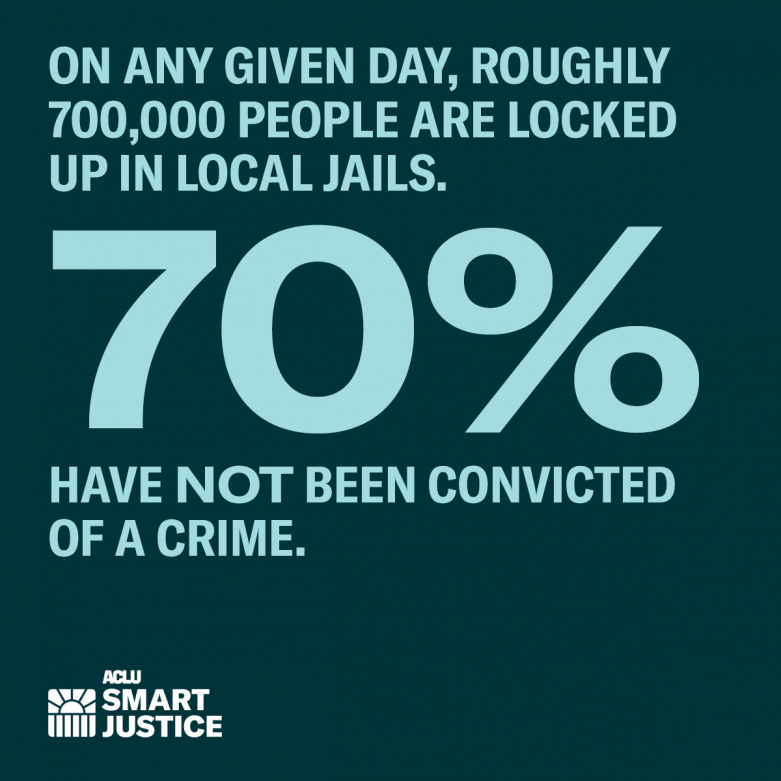 NEW YORK – The American Civil Liberties Union’s Campaign for Smart Justice is launching an initiative that focuses on bolstering the movement to end money bail and eliminate wealth-based pretrial detention.

The initiative is a part of the Campaign’s unprecedented, nationwide, multi-year effort to reduce the U.S. jail and prison population by 50 percent and to combat racial disparities in the criminal justice system by challenging the injustices that have helped make America the world’s largest incarcerator.

“It’s time to end our nation’s current system of cash bail that lets the size of your wallet determine whether you are granted freedom or stay locked up,” said Udi Ofer, director of the ACLU Campaign for Smart Justice. “This nationwide system of wealth-based incarceration keeps people who have not been convicted of a crime in jail for weeks, months, and even years. People lose their families, jobs, and homes as they wait for their case to move through the system. Money should never decide a person’s freedom, yet that’s exactly what happens every day in courts across the country.

“The injustice of wealth-based detention keeps thousands of people behind bars on a daily basis,” Ofer continued. “On any given day in the United States, nearly 450,000 people are sitting in jail even though they have not been convicted of a crime; many because they are too poor to afford cash bail. It’s an unfair system that has an unequal impact on people based on both wealth and race. The only ones benefitting from the current money bail system are bail industry profiteers. It’s time to end a bail system that leads to the incarceration of people awaiting trial because they’re too poor to afford bail.”

The money bail system was originally designed to ensure that people returned to court as their case progressed. It has since transformed into a system that targets those who cannot pay bail, impacting poor and middle class households. Black Americans are subject to pretrial detention at a higher rate than white arrestees with similar charges and history.

Controlling for all other factors, pretrial detention is the greatest predictor of a conviction. One study showed that the non-felony conviction rate jumps from 50% for people released pretrial to 92% for those jailed pretrial. For felony cases, the rate jumps from 59% to 85% when an accused person is jailed.

As a result of the current cash bail system, millions of people are forced to pay cash bail after their arrest or face incarceration before trial. This is despite the fact that they are presumed innocent and have not been convicted of a crime. To avoid being locked up while their cases go through the courts, people who cannot afford bail must pay a non-refundable fee to a for-profit bail bonds company to post the required bail amount.

According to a recent report by Color of Change and the ACLU Campaign for Smart Justice, a small number of insurance companies collect their cut of nearly all the bail bond premiums collected by bail agencies. Nine bail insurers each underwrite a billion dollars in bonds to cover the vast majority of the estimated $14 billion in bonds posted by for-profit bail each year, yielding about $2 billion in industry profits.

Many states have already begun to address these issues with a smarter approach. In 2017, New Jersey all but removed money as a condition of release for people awaiting trial. Instead of wealth, the New Jersey system now requires individualized and robust hearings to determine why a person, who has been accused but not had the opportunity to defend themselves in court, should not be allowed to return home to fight their case without completely disrupting their and their families’ lives. Since New Jersey’s bail reform law took effect on January 1, 2017, the daily population in New Jersey’s jails has dropped 17.2% and cash bail has been imposed only 33 times out of 33,400 defendants.

The ACLU Campaign for Smart Justice is expanding its bail reform efforts both federally and at the state level in this new initiative which not only protects recent reforms but also advocates for new or further reforms through an integrated campaign effort that includes targeted litigation, communications, and legislative advocacy. These efforts will include a ‘Bail Shark of the Month’ communications initiative to highlight the multinational insurance corporations driving the cash bail system.

This press release can be found here: https://www.aclunc.org/news/aclu-announces-nationwide-campaign-support-…