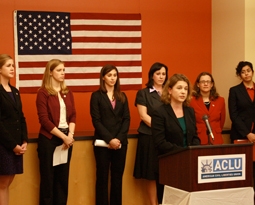 San Francisco – Four servicewomen and the Service Women’s Action Network filed an amended complaint today in their lawsuit against the Department of Defense for its ongoing blanket exclusion of women from thousands of ground combat positions. The plaintiffs originally filed a lawsuit challenging the DoD’s ban on women in combat positions last year with the help of the American Civil Liberties Union, the ACLU of Northern California, and the law firm Munger, Tolles & Olson LLP.

The four servicemembers have all done tours in Iraq or Afghanistan – some deploying multiple times – where they served in combat or led female troops who went on missions with combat infantrymen. Their careers and opportunities continue to be limited by the DoD’s ongoing policy and practice of excluding women from many positions, units, combat arms schools, and training programs, despite the DoD’s announcement in January 2013 that it was rescinding its 1994 combat exclusion directive.

One plaintiff, Army Staff Sgt. Jennifer Hunt, served in Afghanistan, where she accompanied combat arms soldiers on missions in remote mountain areas, and in Iraq, where her vehicle was hit by an Improvised Explosive Device (IED). Hunt was awarded the Purple Heart for shrapnel injuries sustained in that attack. Yet she is still not allowed to compete to attend Special Forces School, which is not open to women.

“I have served honorably side-by-side with my brothers-in-arms for over a decade and, like many of my fellow female soldiers, performed under the same harsh and dangerous wartime conditions. I just want the same opportunities for myself and fellow soldiers to compete for these positions,” said Hunt. “We were deeply gratified when the repeal was announced earlier this year, but the slow progress is hampering the reenlistment decisions of soldiers like myself and impacting the military’s efforts to recruit women for these positions. Attracting and retaining the best and brightest for every job, no matter their gender, is of the utmost importance to secure military readiness.”

Women make up more than 14 percent of the 1.4 million active military personnel, yet are still excluded from over 200,000 positions despite the repeal of the 1994 combat exclusion policy in January. Some branches, such as the Marine Corps, claim that they still have to study the effects of allowing women to serve in combat before opening up combat arms career fields, despite the fact that women have already been serving on the ground for years.

“These women have already shown in Iraq and Afghanistan that they can serve as honorably and bravely as their male counterparts, including in small combat and special forces teams” said Ariela Migdal, senior staff attorney with the ACLU Women’s Rights Project. “There is no justification for maintaining a blanket ban on women in these career fields and combat arms positions.”

Two of the plaintiffs led the Marine Corps Female Engagement Teams (FET) in Afghanistan. The FETs lived with and conducted missions with combat infantrymen. Another plaintiff was sent on similar missions in the Army, accompanying combat troops in Afghanistan. Because these were considered temporary duties outside of the servicewomen’s official specialties, their combat experience is not given official recognition.

“We are losing a generation of leaders while the DoD drags its feet,” said Elizabeth Gill, staff attorney with the ACLU of Northern California. “A generation of women have now deployed and served in combat zones, and want to move into leadership positions. Yet the longer the DoD delays opening all positions to women, the greater the risk that these female leaders will choose to leave the service.”

The amended complaint calls for the federal court to declare that the DoD’s policies and practices of excluding women from combat arms positions and schools violates the Constitution and to require the DoD to allow qualified servicewomen to be considered on their individual merit for all such positions.

"Although combat exclusion was lifted nearly a year ago, we've seen very little evidence of plans to further open up combat assignments to women," said Service Women's Action Network executive director and former Marine Corps captain Anu Bhagwati. "The service branches are stalling while we lose experienced, talented service women to the civilian workforce because of the military's brass ceiling. Tens of thousands of military jobs still remain closed to women. It is unacceptable that in the year 2013 the military would pass over a more qualified woman for a less qualified man. Our troops deserve to serve in a meritocracy. Every woman or man who meets the standard for a job should get the job. Period."