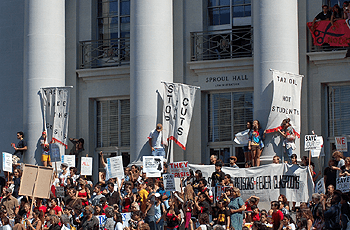 Following protests around California against education budget cuts, student demonstrators at several universities faced harsh disciplinary crackdowns. The ACLU of Northern California has stepped in on behalf of students at UC Berkeley, UC Santa Cruz, and San Francisco State University about questionable discipline of a student protester. The ACLU of Northern California's role involves ensuring that universities follow due process in disciplinary proceedings and that the level of discipline of students is not connected to the content of their protests or intended to squelch further demonstrations.

"Universities can't punish students more harshly when the misconduct is related to political expression than it would for infractions that are not politically motivated," said Julia Harumi Mass, Staff Attorney at the ACLU of Northern California. "Civil disobedience has a strong tradition in California and across this country, and should not be met with disproportionately harsh discipline."

ACLU-NC sent a Public Records Act request today to SFSU President Robert A. Corrigan, seeking documents about disciplinary procedures, and records of student expulsion and suspensions. The PRA request seeks to determine whether SFSU student Halston Chapman, who occupied a campus building along with 14 other students in a December 2009 protest, was given a disproportionately harsh punishment for his offense.

Public access to the records is necessary to determine whether one student's year-long "suspension" (without guaranteed readmission) for participation in a 24-hour protest-related occupation of a building on campus is consistent with general patterns of student discipline at SFSU.