It's time for the highest officials in the state to step to their responsibility to protect the most vulnerable among us — people, including youths, locked up in a way that makes it impossible for the distancing that's the true protection from COVID-19.

Today, the American Civil Liberties Union Foundations of Southern California, Northern California, and San Diego and Imperial Counties filed an emergency lawsuit in California Supreme Court to force the governor and attorney general of California to halt transfers of individuals to U.S. Immigration and Customs Enforcement (ICE) during the COVID-19 pandemic.

And in a second emergency lawsuit, with the national ACLU and the law firm Munger, Tolles & Olson LLP as additional co-counsels, we call upon the governor and attorney general to drastically reduce populations of county jails and juvenile facilities statewide during this emergency.

Conditions at ICE detention centers and county incarceration facilities — where bunk beds are commonly three-feet or less apart, bathrooms are shared by large groups, and individuals are forced to be inches from each other, sometimes in chains — make it impossible to maintain the social distancing and hygienic standards that are the only defenses against COVID-19 outbreaks.

The current conditions at these facilities, including those meant for juveniles, violate the Eighth Amendment to the U.S. Constitution that prohibits “cruel and unusual punishments” and the Fourteenth Amendment that guarantees due process rights, as well as other federal and state laws.

“It is not just those confined to jails, detention centers, and youth facilities who are in danger,” said Peter J. Eliasberg, chief counsel of the ACLU SoCal. “Once the virus gets inside, the regular movement of staff and visitors in and out means that walls and razor wire can neither slow nor stop the viral spread to communities at large.”

The ICE transfers lawsuit was filed on behalf of two organizations that advocate for the rights of individuals in the criminal justice and immigration systems — the California Attorneys for Criminal Justice (CACJ), and the Southern California chapter of the American Immigration Lawyers Association (AILA SoCal).

The jails and juvenile facilities lawsuit was filed on behalf of three organizations that advocate for people in the criminal justice system, CACJ, the National Association of Criminal Defense Lawyers (NACDL), and the Youth Justice Coalition (YJC) that aids youths.

“Californians cannot spare a day, or even an hour, to take the actions sought in this petition,” said NACDL Vice President Martín Sabelli. “Protecting lives is a constitutional, moral, and humanitarian duty. As lawyers constitutionally obligated to advocate for our clients in a courtroom when their freedom is a stake, we have no less a duty to advocate for them when their lives are at stake. We are all in this together.”

Interior photos, including those taken inside California jails to show how it would be impossible to maintain the recommended social distancing, were submitted as parts of declarations in the case. 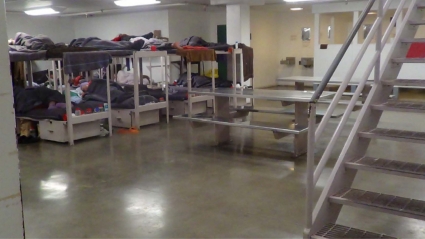 The vast majority of ICE transfers during the pandemic have been from state prisons and county jails — even people released as part of efforts to reduce the populations at those facilities have been turned over to ICE and sent to detention centers.

But these crowded centers, with a severe lack of proper hygiene and cleaning products, are rife for virus outbreaks. The situation has gotten so desperate that at several of the facilities detainees have gone on hunger strikes.

The jails/juvenile facilities lawsuit notes that during the pandemic some reductions in populations have been accomplished, but far from enough. Still, there are tens of thousands of people sleeping in bunks only a few feet apart, sitting close at communal tables for meals.

There has been little done at juvenile halls and camps to protect from transmission of the virus. A mother quoted in the lawsuit says her son “stays in one big dormitory where there are two long rows of approximately 20 beds by the walls, with a large common eating area and bathroom area attached. There is no way the youth can all be together in that kind of environment and socially distance themselves six feet apart.”

During this state of emergency, there is a substantial number of incarcerated people in county jails who could be released. As for the fourth quarter of last year, 67% of people incarcerated in county jails were held pretrial and thus presumed innocent. Many were there because they could not afford to meet bail. Others are incarcerated on minor offenses or technical violations. Some have less than four months left on their sentences.

The lawsuit calls on the state attorney general to order county sheriffs to evaluate true capacity at jails based on social distancing directives. Releases can be based on the consideration of several factors: medical vulnerability, non-violent pre-trial charges, technical violations of parole or probation, being within six months of release.

The lawsuit also calls for youths held in facilities for relatively minor offenses also be released, especially if they are in institutions that have ceased providing education and other rehabilitative programming.

“For months now, public health experts and even corrections officials have been warning that jails are tinderboxes for the spread of COVID-19," said Carl Takei, senior staff attorney at the ACLU's Trone Center for Justice and Equality. "There is clear data that shows the ways in which jails will cost more lives in the community at large. Governor Newsom has acknowledged this reality — if he does not take dramatic steps to decarcerate the state's jails, he will be to blame for the lives lost senselessly."

Read the lawsuit on jails and juvenile facilities here: https://www.aclusocal.org/sites/default/files/aclu_socal_nacdl_20200424_petition_writ_mandate.pdf