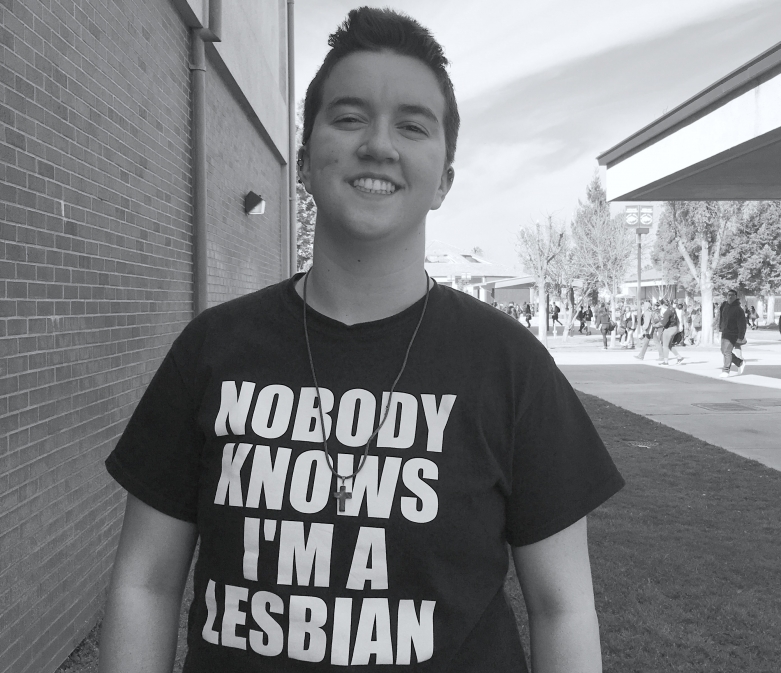 Manteca, CA – Last night, the Manteca Unified School District voted to update the dress code as part of a settlement with the ACLU of Northern California, which sued two Sierra High School officials on behalf of a lesbian student in October 2015. Eleventh-grader Taylor Victor was singled out, chastised, and censored after wearing a shirt to school identifying herself as a proud member of the LGBT community. The dress code has been updated district-wide to make it clear that students can express their own identity and their support for other students’ identities – including identities of race, gender, sexual orientation, disability, and other protected groups.

Victor has been a student in the Manteca Unified School District since kindergarten. Soon after the start of the 2015 fall semester, Victor wore a shirt to school that read “Nobody Knows I’m a Lesbian.” By wearing the shirt, Victor was expressing, albeit ironically, that she is a lesbian, as well as her personal belief that LGBT people should be able to be out and proud. She was called into the vice principal’s office and told that she couldn’t display her personal beliefs on a T-shirt. After she refused to change her shirt, the vice principal sent her home. The administration later claimed the shirt violated the dress code because it was “disruptive,” “sexually suggestive,” and “degrades religious values.”

“I wore the shirt to express that I’m proud of my identity and that it’s okay to be true to yourself,” said Victor. “Standing up to my school was really hard to do, but I'm so happy that I did because the right to free speech is a big deal for everyone."

“The law is very clear that public schools can’t censor the personal beliefs of students,” said ACLU of Northern California Staff Attorney Linnea Nelson. “Freedom of speech is a bedrock principle of our democracy, and censorship teaches students exactly the wrong lesson on what America is about. We are pleased to see the District make these changes.”

The settlement agreement allows Victor to wear her shirt without threat of punishment or retaliation. District administrators will be required to attend professional development training to bring them up-to-date on their duty to protect free speech.

The case was filed in Federal Court in the Sacramento Division.