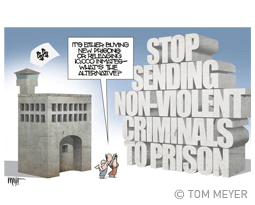 S.B. 649, the Local Control in Sentencing Act, authored by Sen. Mark Leno (D-San Francisco), was approved by the Senate in a 23-14 vote, and moves now to the state Assembly for consideration.

“We commend the Senate for approving this bill at a time when lasting, sustainable and common sense solutions to California’s ongoing incarceration crisis are so needed,” said Margaret Dooley-Sammuli, senior criminal justice and drug policy advocate for the ACLU of California. “This bill will help counties break the state’s addiction to incarceration by enabling them to invest their limited resources in the kinds of community-based treatment, rehabilitation and education programs proven to reduce recidivism, prevent crime and increase public safety.”

The bill, sponsored by the American Civil Liberties Union of California, the Drug Policy Alliance and others, gives prosecutors the flexibility to charge low-level drug possession for personal use as a misdemeanor instead of a felony. The bill also gives judges discretion to deem a low-level drug possession offense to be either a misdemeanor or felony after consideration of the offense and the defendant’s record. S.B. 649, which does not apply to anyone involved in selling, manufacturing or possessing drugs for sale, will give counties the flexibility to safely alleviate overcrowding in county jails, ease pressure on California’s court system and result in more than $100 million in annual savings for the state and local governments.

“One of the best ways to help ensure that our neighborhoods are safe is to provide low-level offenders with the rehabilitation they need to successfully reenter their communities,” said Leno. “However, our current laws do just the opposite. We give non-violent drug offenders long terms, offer them no treatment while they’re incarcerated, and then release them back into the community with few job prospects or opportunities to receive an education. S.B. 649 gives local governments the flexibility to choose reduced penalties so that they can reinvest in proven alternatives that benefit minor offenders and reserve limited jail space for serious criminals.”

S.B. 649 will allow counties to reduce jail spending and dedicate resources to probation, drug treatment and mental health services that have proven most effective in reducing crime. It will also help law enforcement rededicate resources to more serious offenders. The Legislative Analyst’s Office estimates reducing penalties for drug possession could save the state and counties about $159 million annually.

Across the country, 13 states, the District of Columbia and the federal government treat drug possession as a misdemeanor. Drug crime is not higher in those states. A statewide poll of Californians conducted by Tulchin Research late last year showed that an overwhelming majority of Californians support this type of drug sentencing reform, with 75 percent of state voters favoring investment in prevention and alternatives to jail for non-violent offenders. In addition, 62 percent of Californians agree that the penalty for possessing a small amount of illegal drugs for personal use should be reduced to a misdemeanor.

Along with the ACLU and Drug Policy Alliance, the bill is sponsored by the California NAACP, the California Public Defenders Association, the William C. Velasquez Institute, Californians for Safety and Justice and the Friends Committee on Legislation.