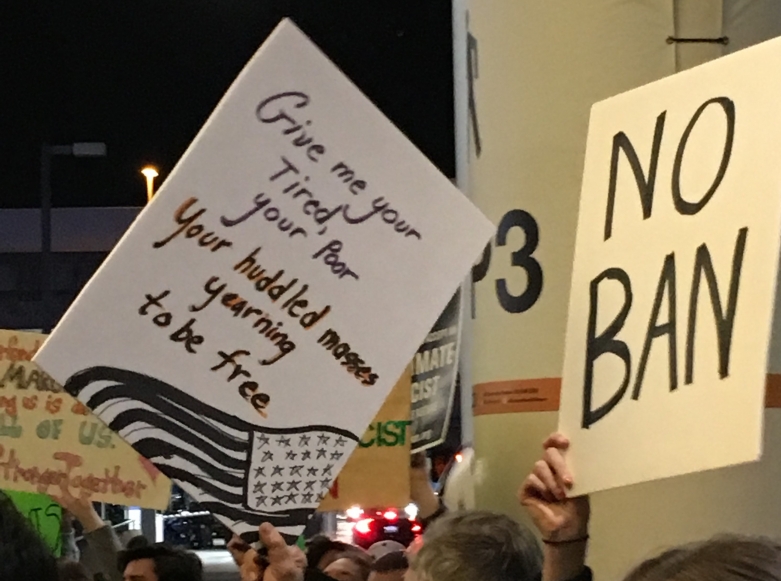 Three students at California universities, along with Jewish Family & Community Services East Bay, filed a lawsuit today against President Donald J. Trump, the Department of State, the Department of Homeland Security, and U.S. Customs and Border Protection for establishing and enforcing an unconstitutional and discriminatory Muslim ban. The plaintiffs are represented by the ACLU of Northern California, the ACLU of Southern California, the ACLU of San Diego, and the ACLU National Immigrants’ Rights Project, along with Keker Van Nest & Peters LLP.

The complaint notes that President Trump’s Executive Order of January 27, 2017, “Protecting the Nation from Foreign Terrorist Entry into the United States,” constitutes an unlawful attempt to discriminate against Muslims and to establish a preference for one religion over another. It further argues that reference in the Executive Order to Iraq, Iran, Libya, Somalia, Sudan, Syria, and Yemen is transparently a pretext for the underlying aim to establish this preference. As such, the government’s actions violate the First Amendment, the equal-protection and due process rights granted under the Fifth Amendment, the Immigration and Nationality Act, and the Administrative Procedure Act.

“The federal government has made it clear that it intends to favor Christian immigrants over Muslims in making decisions about who to detain, interrogate, deport, or entirely refuse entry,” said Julia Mass, Senior Staff Attorney with the ACLU of Northern California. “We are a diverse society. American Muslims, immigrants and U.S.-born alike, are part of the fabric of this nation.”

The ACLU’s suit also challenges a January 27, 2017 Department of State letter that summarily and provisionally revoked most valid nonimmigrant and immigrant visas of nationals of the seven predominantly Muslim countries.

Plaintiff Hadil Al-Mowafak is a Stanford University freshman with an F-1 student visa who is now unable to travel to visit her husband in Yemen because of President Trump’s Executive Order. Plaintiff Wasim Ghaleb is a Yemeni student at Grossmont College in San Diego, California. He travelled to Saudi Arabia on January 15 to visit his family, fully intending to fly back to California two weeks later for the Spring semester. Though he possesses an F-1 student visa, he is now barred from returning. Plaintiff John Doe is from Iran and is currently a Ph.D candidate at University of California, Berkeley. He possesses a valid F-1 student visa and recently received and accepted a job offer at a top Fortune 50 Company in Silicon Valley, which is now in jeopardy because of the Executive Order.

Jewish Family & Community Services East Bay (JFCS East Bay) is an organizational plaintiff in the suit. JFCS East Bay has a long history of working to resettle and provide legal and other services to refugees and immigrants from many countries. “All throughout history, people have summoned their courage and moved to create a better life for themselves and their family,” said Executive Director Avi Rose. “This executive order is dishonoring our history, it’s dishonoring our values, and it’s bringing chaos and despair to the lives of everyday people.”

The suit seeks to establish plaintiffs as a class, representing all people who are nationals of Iran, Iraq, Libya, Somalia, Sudan, Syria or Yemen and who currently are, or recently have been, lawfully present in California and who would be able to travel to the United States or leave and return to the United States if it were not for the Executive Order.  Plaintiffs also seek a declaration that the Executive Order is illegal and may not be enforced.