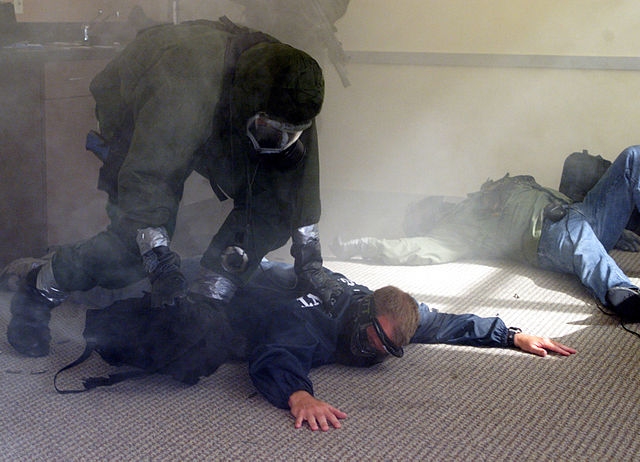 Beginning in 2010, nearly 80 organizations came together to form the Coalition for a Safe San Francisco. Their collective effort raised questions about the SFPD’s cooperation with FBI agents in the JTTF, and the troublingly low federal standards used by the FBI and JTTF. Their work led to the passage of the Safe San Francisco Ordinance in 2012, which limited such interactions, subjected them to the Department’s own standards, and required annual reports.

In 2015, CAIR-SFBA and ALC filed a complaint with the Office of Citizen Complaints (now the Department of Police Accountability) regarding the SFPD’s ongoing participation in the JTTF, the questioning of Sarmad Gilani in violation of the Ordinance, and the its inaccurate annual reports. Since then ALC, CAIR-SFBA, NLG, AROC, and ACLU have been advocating for a review of the Department’s protocols, and officer trainings.

The suspension is effective immediately. The Department cannot reenter the JTTF without renegotiating its contract with the FBI, which, by law, must first be submitted for discussion and public comment before the Police Commission.

“After seven years of advocacy we welcome the suspension of SFPD participation in the JTTF,” said Brittney Rezaei, CAIR-SFBA Civil Rights Attorney. “As our concerns with the conduct of the federal government increase, we are happy to see our police department take this important step to ensure its commitment to protecting our community.”

“This puts SFPD in alignment with the Mayor, the Board, and other city officials in recognizing the urgent need to ensure that federal agencies and policies are consistent with San Francisco’s laws and values,” said Alan Schlosser, ACLU Northern California Senior Counsel.

“Ending SF's relationship with the JTTF is instrumental in fighting against the targeting of Arabs and Muslims through local and federal law enforcement, particularly in this moment,” said Lara Kiswani, AROC Executive Director. “We have said all along that no reform or oversight of this collaboration would protect our communities. This win is a result of tireless community advocacy and organizing against policing to ensure that all communities are protected, and that SF acts on its commitment to be a Sanctuary city.”

“Joint Terrorism Task Forces have had a chilling effect on the First Amendment rights of Arab and Muslim communities throughout the country,” according to Nina Farnia, President of the San Francisco chapter of the National Lawyers Guild. “The Task Forces have led raids of activists’ homes and offices for merely engaging in the right to dissent. In the face of ever-increasing repression by the federal government, we applaud local agencies’ decision to suspend participation in the JTTF.”

“While this is excellent news, our communities remain vigilant. We sincerely hope the SFPD remains out of the problematic JTTF, but any attempt to rejoin it must not happen without officers receiving proper training on our local laws,” said Christina Sinha, ALC National Security & Civil Rights Program Staff Attorney.