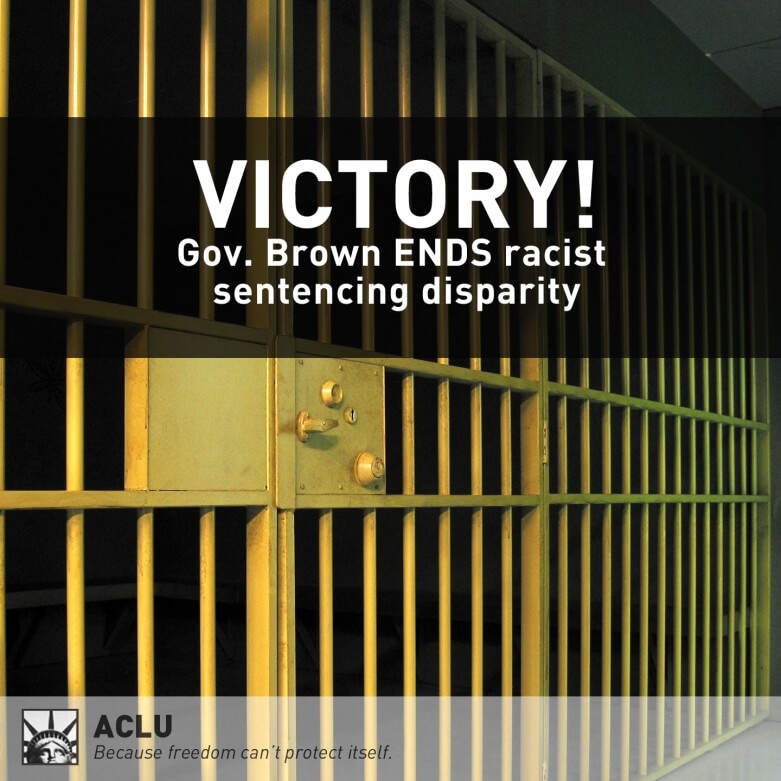 SACRAMENTO, CA — Today Gov. Jerry Brown signed the California Fair Sentencing Act (SB 1010) authored by Sen. Holly Mitchell (D-Los Angeles). The legislation eliminates the groundless disparity in sentencing, probation, and asset forfeiture guidelines for possession of crack cocaine for sale versus the same crime involving powder cocaine that has resulted in a pattern of racial discrimination in sentencing and incarceration in California. The law takes effect in January.

“California is finally moving to the right side of history on this issue,” said Margaret Dooley-Sammuli, senior policy advocate with the ACLU of California. “By signing the California Fair Sentencing Act today, Gov. Brown has chosen a more equitable criminal justice system over failed, racially unjust drug war policies.

“For far too many years, we have had to watch harsh penalties applied disproportionately to Black and Brown urban communities,” said Susan Burton of A New Way of Life, who spent many years in prison herself for this offense. “This law is a beginning to fairer sentencing policies in California.”

Crack and powder cocaine are two forms of the same drug. Scientific reports, including a major study published in the Journal of the American Medical Association, demonstrate that they have nearly identical effects on the human body. Crack cocaine is a product derived when cocaine powder is processed with an alkali, typically common baking soda. Gram for gram, there is less active drug in crack cocaine than in powder cocaine.

California is one of 13 states that have maintained sentencing disparities between crack and powder cocaine offenses. The others are Alabama, Arizona, Iowa, Maine, Maryland, Missouri, New Hampshire, North Dakota, Ohio, Oklahoma, Vermont, and Virginia.

“The passage of SB 1010 moves California in the right direction by decreasing sentencing inequalities that have plagued communities of color for decades,” said Zachary Norris, Executive Director, Ella Baker Center for Human Rights.  “We are thrilled at this outcome and will continue our efforts to end mass incarceration by shifting resources away from punishment into real solutions.”

“We applaud Governor Brown for supporting and signing SB1010, a historic reform that will help end the ridiculous, racist sentencing disparity between crack and powder cocaine, which unfairly punishes people of color more harshly than white people for using the same drug, and saving millions of taxpayer dollars in the process,” said Dr. Paul Song, executive chairman of the California-based Courage Campaign. “California’s prisons are broken, unconstitutionally overcrowded, and disproportionately filled by people of color serving sentences for nonviolent drug possession. Solutions like SB1010 are an important step towards a smarter, more humane, and cost-effective justice system in California. We call on Gov. Brown to continue this forward thinking and announce his support for Proposition 47, which would further help California reform its often-misguided sentencing laws.”