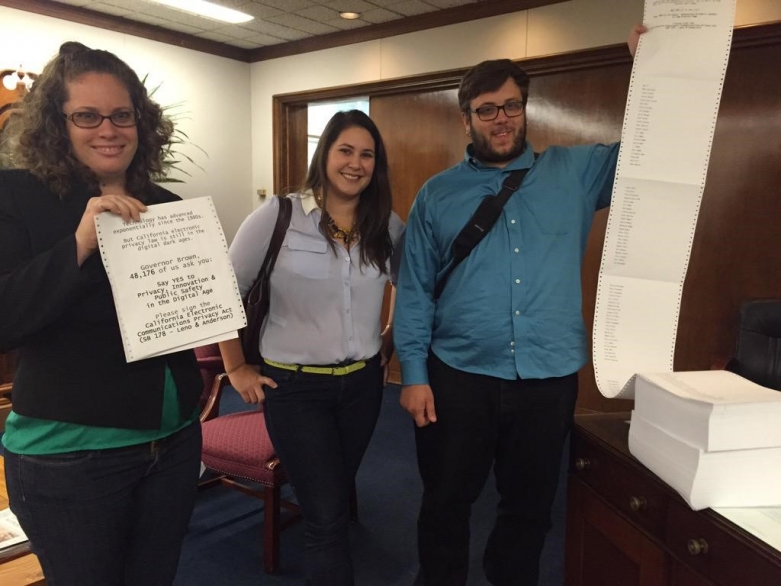 “Governor Brown just signed a law that says ‘no’ to warrantless government snooping in our digital information. This is a landmark win for digital privacy and all Californians,” said Nicole Ozer, Technology & Civil Liberties Policy Director at the ACLU of California. “We hope this is a model for the rest of the nation in protecting our digital privacy rights.”

A diverse coalition of the state’s leading technology companies, civil rights organizations and even law enforcement banded together to push for the swift passage of this commonsense bill that protects privacy, promotes innovation and supports public safety. California voters overwhelmingly wanted change: 82 percent have called for the police to get a warrant for digital information. CalECPA also directly responded to exponential growth in law enforcement demands for digital information, with demands to Google nearly tripling over the last five years and Twitter reporting a 52 percent jump just this past year. The major state law enforcement groups removed opposition to the bill and police on the ground said they were proud to support the bill because it was in the best interest of all citizens of California.

“For too long, California’s digital privacy laws have been stuck in the Dark Ages, leaving our personal emails, text messages, photos and smartphones increasingly vulnerable to warrantless searches,” said Senator Leno. “That ends today with the Governor’s signature of CalECPA, a carefully crafted law that protects personal information of all Californians. The bill also ensures that law enforcement officials have the tools they need to continue to fight crime in the digital age.”

“Senator Leno and I helped bridge the gap between progressives and conservatives to make the privacy of Californians a top priority this year,” said Senator Anderson. “This bipartisan bill protects Californians’ basic civil liberties as the Fourth Amendment and the California Constitution intended.”

CalECPA updates California's privacy protections to reflect the modern digital world and reinforces constitutional rights to privacy by ensuring that police get a warrant before accessing digital information like emails, text messages and online documents and tracking or searching electronic devices like cell phones. Full bill language, polling, fact sheets, and more information about CalECPA can be found here: www.aclunc.org/calecpa.