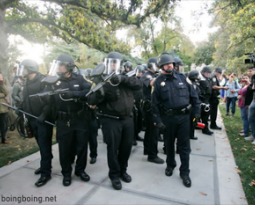 Today attorneys for 21 UC Davis students and recent alumni announced the details of their settlement of the federal class-action lawsuit against UC Davis over the shocking incident in which campus police repeatedly doused seated, non-violent student demonstrators with military grade pepper spray at close range. The lawsuit charged that the police violated state and federal constitutional protections, including the First Amendment to the U.S. Constitution, when they arrested and used excessive force against these non-violent demonstrators. The UC Regents approved the settlement in a September 13 meeting, and the settlement documents were filed with the court today. A federal court judge must approve the settlement before it is finalized.

“I want to make sure that nothing like this happens again. That’s the best thing that could come from this. Since November 18 students have been afraid of the police. The University still needs to work to rebuild students’ trust and this settlement is a step in the right direction,” said Fatima Sbeih, who just graduated with an International Studies degree. Sbeih was pepper-sprayed on the quad. She had panic attacks and frequent nightmares for months after the incident, and often woke up screaming.

“I want the University and the police to understand what they did wrong. Police should be accountable to students,” said Ian Lee, who will be a sophomore this year. Lee was less than two months into college when he was pepper-sprayed last year. “I was demonstrating because of rising tuition hikes and privatization of the University. Then we faced police brutality in response. I felt like the University silenced me.” After the incident Lee experienced panic attacks and was afraid to participate in protests.

The student plaintiffs who were pepper-sprayed experienced excruciating effects. In some cases, the pain lasted for days. Like Fatima and Ian, many have experienced trauma since the incident. As a result, many students’ grades suffered.

The University’s response to seated student, non-violent protesters has been widely deemed unacceptable. A task force that the University created to investigate and analyze the response to the protestors concluded in an extensive report that “The pepper spraying incident that took place on November 18, 2011 should and could have been prevented,” and found culpability at all levels of the University administration and police force.

The settlement was filed today with the United States District Court, Eastern District of California, for review by a federal judge before it becomes final. The terms of the settlement include:

“If the First Amendment means anything, it’s that students should be able to exercise their free speech-rights on their college campus without being afraid of police violence. What happened on November 18 was among the worst examples of police violence against student demonstrators that we’ve seen in a generation. The settlement should be a wake-up call for other universities and police departments,” said Michael Risher, staff attorney with the ACLU of Northern California. “The early resolution to this lawsuit means that the students can begin the process of moving on and we can work with the University to ensure that nothing like this ever happens again at the University of California.” The ACLU-NC will use the attorneys’ fees awarded to it in the case to advocate for free speech rights and other fundamental civil liberties.

“Police should never have been called out to disperse the lawful protest against steep tuition increases, police brutality against UC Berkeley protesters, and privatization of the university,” said Mark E. Merin, one of the attorneys for the plaintiffs. “The University never should have used police against peaceful protesters. Perhaps the economic costs of violating students’ First Amendment rights to free speech and free assembly will discourage similar abuse in the future,” Merin added.

On November 18, 2011, students gathered in the quad on the UC Davis campus to demonstrate against ongoing tuition hikes, as well as against brutal treatment of demonstrators at UC Berkeley. UC Davis campus police arrived in riot gear and officers threatened students, who were seated on the quad in a circle, and ordered them to disperse. When students remained seated to continue their demonstration, a UC Davis police officer repeatedly sprayed the line of protesters with pepper spray at point-blank range, while scores of other officers looked on. Another officer sprayed the demonstrators from behind. The seated students posed no physical threat to the officers.