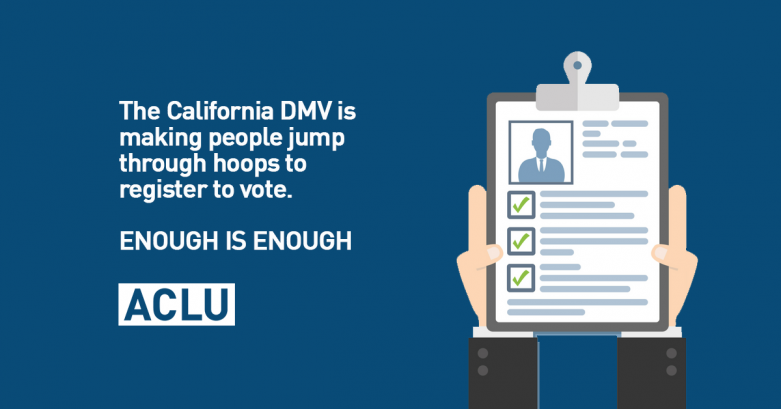 “The goal of the NVRA was to make voter registration easier and more seamless by integrating the information already collected by the DMV to get people registered,” said Kathay Feng, Executive Director of California Common Cause. “It’s an embarrassment that in 2017, more than 20 years after the law was enacted, California DMV is still violating the law by making millions of people jump through hoops to become voters.”

Plaintiffs are represented by the ACLU of Northern California, Demos, Project Vote, and the law firm of Morrison & Foerster. The plaintiff’s attorneys first notified California DMV of widespread violations of the NVRA in February 2015. In January 2016, to avoid a lawsuit, California DMV incorporated voter registration into its in-person and online transactions and stopped requiring people to fill out a separate card. DMV refused, however, to commit to incorporating voter registration into its mail renewal process.

“It is simply unacceptable for the DMV to deny seamless voter registration to millions of Californians who renew their licenses by mail,” said Helen Hutchison, President of the League of Women Voters of California. “While we appreciate the work the DMV did to create an integrated voter registration process for people who go to their offices or renew their licenses and IDs online, others should be given the same opportunity.”

Delia de la Vara, senior vice president of the National Council of La Raza (NCLR), expressed concerns about the impact on Latino voters. “There are still more than 5.5 million eligible but unregistered California voters, and Latinos are disproportionately represented in that group,” she said. “That’s why NCLR is committed to seeing DMV do everything required by law to ensure these antiquated barriers to registration are eliminated.”

"Since we first alerted DMV to these problems, multiple local, state, and federal elections have passed, including the 2016 presidential election,” said ACCE Executive Director Christina Livingston. “Enough is enough. It’s time for California to make registration easier for every voter as the law requires and to get it done before another election passes us by.”