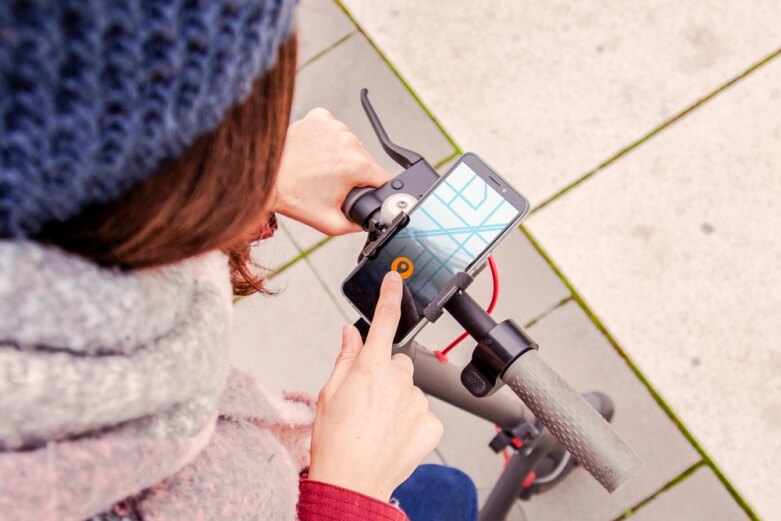 Renting an electric scooter should not give the government the right to trace your every move — where you start, where you end, and all stops, twists, and turns in between. But that's the situation in the City of Los Angeles where electric scooter rental companies are required to provide real-time and historic GPS tracking data to city officials.

Beginning in late 2017, communities across California witnessed a near-overnight invasion of motorized electric scooters on city sidewalks. Equipped with tiny motors, batteries, and sleek insignia, they introduced a new dockless mode of transit for smartphone-equipped consumers. But as the popularity of the scooters quickly rose, so did complaints over cluttered sidewalks and interference with public right-of-ways.

In Los Angeles, the Department of Transportation (LADOT) adopted a software tool — the Mobility Data Specification (MDS) — to use GPS data to automatically track the precise movement of every scooter rider. In order to get permits to operate in the city, the electric scooter and bike rental companies had to agree to use MDS on all their vehicles and give LADOT access to their GPS coordinates.

The data does not include the identity of the rider, but that information can be determined in a number of ways. For example, when a trip begins at a home and ends at a sensitive location — such as a therapist’s office, marijuana dispensary, a Planned Parenthood clinic, or a political protest — all the government would need to know is who lives at the house in order to identify the rider and why the rider was making the trip.

After it's collected, this kind of detailed information can ultimately be lost, shared, stolen, or subpoenaed. If in the wrong hands, it can also result in arrest, domestic abuse, and stalking, as a recent investigation of automatic license plate reader information in California revealed. In other cases, location information in the hands of authorities can stoke racial and gender-based violence.

The lawsuit, brought by against the City of L.A. and LADOT, seeks an injunction to end all prospective collection, storage, or maintenance of precise location data acquired through MDS.

On February 23, 2021, the district court granted LADOT’s motion to dismiss the complaint. On July 23, 2021, plaintiffs filed their appeal brief, arguing that the district court was wrong to dismiss the case under both the Fourth Amendment to the United States Constitution and CalECPA. The case awaits decision from the Ninth Circuit Court of Appeals.

Brief of Amicus Curiae Kevin Webb in Support of Appellant