This case challenged the threatened violation of the voting rights of thousands of California citizens, arising from the use of obsolete, unreliable, and discredited pre-scored punch card voting equipment in the election scheduled to take place on October 7, 2003 regarding the gubernatorial recall and the vote on Proposition 53 (Legislative Constitutional Amendment that would dedicate part of the state budget every year to State and Local infrastructures, such as parks, open space projects, water and highways) and Proposition 54 (the “Classification of Race, Ethnicity, Color and National Origin” Initiative). If the election proceeds on this date, voters in at least six counties – including Los Angeles County, the most populous electoral jurisdiction in the country – will use the same punch card voting machines challenged in the Common Cause, et al. v. Jones litigation, which resulted in a consent decree decertifying these machines effective March 1, 2004.

Conducting the election on this date would violate the fundamental right to vote of all citizens in these counties, and would have an especially severe impact on the voting rights of African-American, Latino, and Asian-American voters. Plaintiffs therefore seek injunctive relief postponing the scheduled election until on or after this decertification date, so that all Californians participating in that election may cast votes in the recall election with assurance that their votes will accurately be counted.

This case was brought under the Fourteenth Amendment to the United States Constitution, and Section 2 of the Voting Rights Act. 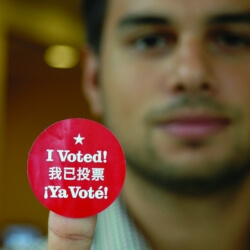 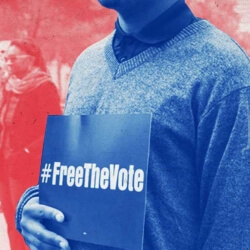 Our Democracy Needs Everyone, Including People on Parole