Discharged, Then Discarded: How U.S. Veterans are banished by the country they swore to protect 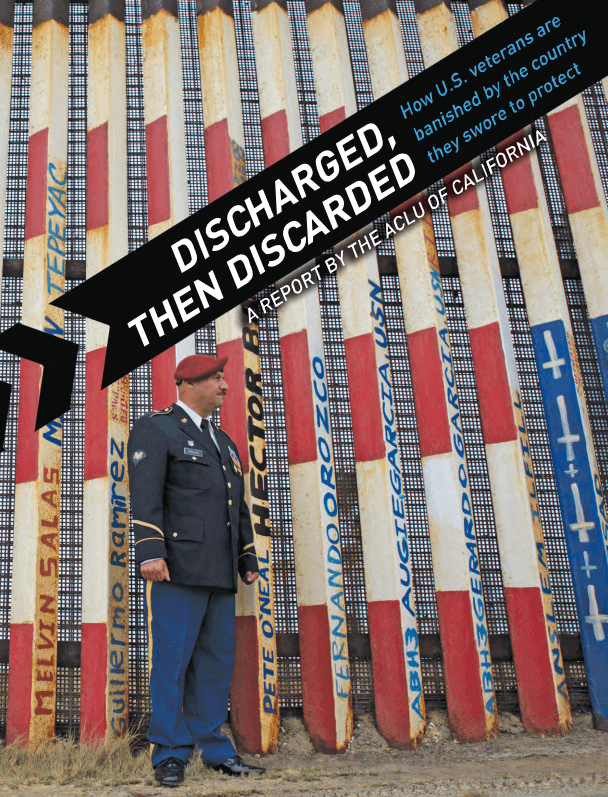 "We don’t know how to do anything besides fight. That’s how they trained us. We will never give up. Never. Hector will be our rock. With this rock, we’re going to start a ripple, and that will turn into a wave. Something will happen—we know it." – Alex Bernal, reacting to the death of deported Vietnam veteran Hector Barrios in Mexico, April 21, 2014.

Foreign-born soldiers have served the United States since the founding of the Republic. Their dedication to the military and to the country they love – indeed, for soldiers who came here as young children, the only country they’ve ever known – matches and often surpasses the commitment of the native born. Yet for some, honorable service has been rewarded with dishonorable actions on the part of a system they swore to defend and protect.

They are members of what is unfortunately a growing brotherhood – veterans of the United States armed forces who have been unceremoniously deported. Many are combat veterans who sustained physical wounds and emotional trauma in conflicts going back to the war in Vietnam. Many have been decorated for their service. But service records notwithstanding, the U.S. has seen fit to kick them out of the country, sometimes for minor offenses that resulted in little if any incarceration.

What’s worse, their military service entitled these men to naturalization. Many believed they became citizens by nature of their service and oath –some were told as much by their recruiters – and were never informed otherwise. They should all be U.S. citizens today, at home with their loved ones, but they languish in unfamiliar and often dangerous foreign places, unable in many cases to speak the native language, because of bureaucratic bungling and government indifference.

Our report, Discharged, Then Discarded, documents our analysis of 59 cases of veterans who have been forced out of the country or are still in the U.S. but facing deportation. The vast majority of these men had been in the United States lawfully for decades and long ago lost any ties to the nations in which they were born. They were swept up in a backlash against immigrants that started in earnest 20 years ago with the passage of draconian laws that eliminated judicial discretion and reclassified many low-level offenses as “aggravated felonies” mandating deportation.

In many cases, these were minor offenses committed by veterans who succumbed to the difficulties of readjusting to civilian life and paid their debt to society. Had they been naturalized, as they should have been after being honorably discharged, they would not have been forced to settle a second debt – lifetime banishment from the United States.

In addition to the humiliation and ignominy of deportation, that banishment effectively denies these men access to often critically needed medical care. Regardless of immigration status, all U.S. military veterans are entitled to treatment at Department of Veterans Affairs medical facilities, but few deported veterans are granted the necessary waivers to access that care either in the states or abroad. In a few tragic cases, we found examples of veterans who could have been saved but died as their friends and loved ones tried desperately to cut through mountains of red tape.

Banishment also wreaks havoc on the lives of the families left behind, who are overwhelmingly U.S. citizens or lawful permanent residents themselves. Children grow up without their fathers, mothers raise families alone, and parents too old to travel cannot see their sons. Meanwhile, in some parts of the world, the deported veterans find themselves targets of recruitment efforts by cartels and gangs, and their resistance places their very lives at risk for the United States once again.

The purpose of this report is to share the trends and patterns we have identified, to offer policy solutions to end the disgraceful practice of deporting veterans, address the needs of those who have been deported, and, ultimately, to help bring our banished veterans back home to the U.S. where they can be reunited with their families