The Hidden Death Tax: The Secret Costs of Seeking Execution in California 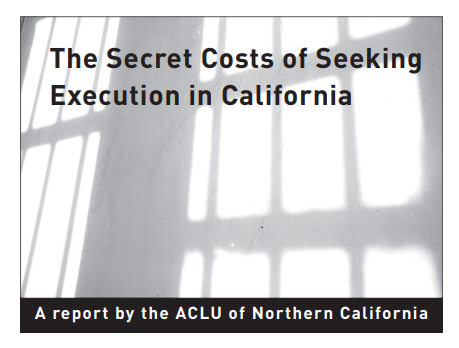 "The Hidden Death Tax" is a comprehensive report on the costs of California’s death penalty, analyzing for the first time records of actual costs in California death penalty trials.  The report demonstrates that while California tax payers spend well over $100 million every year on the death penalty, it is unclear just how much money is being spent.

At the post-conviction level, California taxpayers pay at least $117 million each year seeking execution of the people currently on death row, or $175,000 per inmate per year. The largest single expense is the extra cost of simply housing people on death row, $90,000 per year per inmate more than housing in the general prison population. Executing all of the people currently on death row or waiting for them to die there will cost California an estimated $4 billion more than if all of the inmates on death row were sentenced to die of disease, injury or old age.

While the costs of the death penalty at the state level may be readily identified, the costs at the county level remain largely hidden from the public.

For the first time ever, "The Hidden Death Tax" reviews the records of a sample of homicide trials where actual costs were recorded. These records reveal that death penalty trials in California have cost as much as $10.9 million, and have had substantial effects on local prosecutors’ offices and law enforcement agencies.

Further, when detailed records are available, they reveal both questionable costs (like more than $900 in dry cleaning charged to the county) and efforts to reduce costs (like negotiating to pay an expert 1/5 the usual rate).

"The Hidden Death Tax" shows that the death penalty costs counties at least $22 million more per year than seeking death in prison, and that local county agencies suffer every time the death penalty is sought.

Little is currently being done to track the details of these expenses.  But the records obtained and reviewed by the ACLU-NC in this report demonstrate that the costs can be tracked and that valuable information is revealed when they are.  "The Hidden Death Tax" appeals for greater transparency and accountability for a system that costs California much more than it can afford.