Outside the Law: The Legal War Against Unhoused People 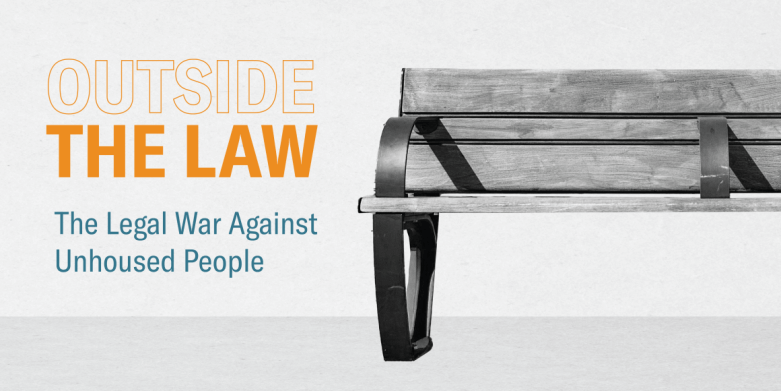 The plight of people who are unhoused has reached horrific proportions in California, but instead of embarking on a resurgence of affordable housing, communities have instead instituted policies and regulations that target unhoused people by harassing, citing, segregating, banishing, and even imprisoning them.

A new, comprehensive report, “Outside the Law: The Legal War Against Unhoused People,” by the ACLU Foundations of Northern California, Southern California, and San Diego & Imperial Counties spotlights the discriminatory tactics that cities and counties throughout California have instituted to target unhoused people, ignoring the bedrock principle of equal treatment under the law. It calls upon communities to amend anti-discrimination laws to include unhoused people and acknowledge their fundamental human rights.

The report finds that:

The ordinances and regulations adopted by cities are often purposely vague as to allow for harassment. An example cited in the report is from the city of Novato where camping was banned in city parks, open spaces, within 50 feet of “critical infrastructure,” etc. When asked where unhoused people could exist, the city manager answered, “Anywhere it’s not illegal would be legal.”

Other California cities whose policies and practices against unhoused people are cited in the report include: Chico, Laguna Beach, Lancaster, Los Angeles, San Diego, Santa Ana, and Santa Cruz.