The Right to Remain a Student: How CA School Policies Fail to Protect and Serve 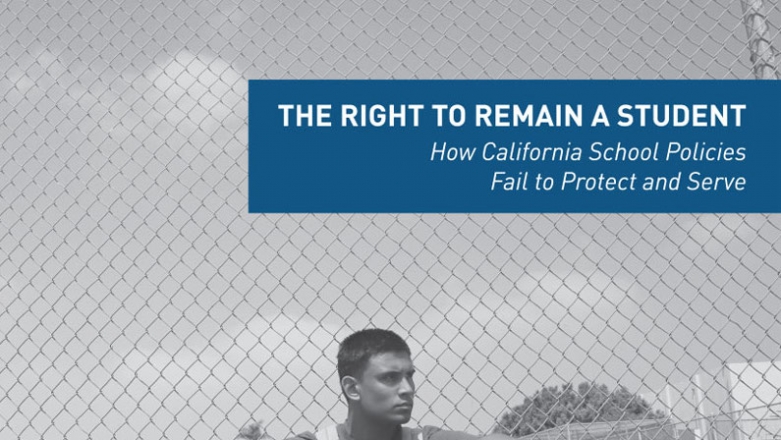 A disturbing trend has emerged in California—police officers are stationed in schools and are replacing educators as disciplinarians for minor offenses and student behavior issues. Further, on-campus policing often results in over-criminalizing students—mostly low-income students of color—and pushes affected students out of the educational environment and into the school-to-prison pipeline. This increased policing in schools harms school climate and undermines students’ self-esteem by making them feel like suspects and criminals.

The ACLU of California’s report, The Right to Remain a Student: How California School Policies Fail to Protect and Serve, discusses the effects of increased police presence on campus. The report also reviews California school districts’ policies on student discipline and police on campus and finds that most districts have deficient, vague, or even non-existent policies governing police contact with students. Finally, the report provides a description of the challenges facing California students and offers educators, administrators, law enforcement, and community stakeholders resources that will encourage strong district policies that minimize police contact and promotes safe campuses.

School districts too often rely on police officers to handle minor violations, who then frequently mishandle the situation, resulting in harmful consequences for students and families.

Between 2005 and 2014, San Bernardino Unified School District police arrested over 30,000 students—mostly for minor violations such as graffiti and failure to abide by daytime curfews. In one incident, an officer choked, pepper sprayed, and beat a teen for hugging his girlfriend on campus.

Criminalization has short and long term damages and funnels students into the school-to-prison pipeline.

National data revealed that an arrest doubles a high school student’s likelihood to dropout and subsequent court involvement further doubles that risk. A Chicago study found that only 27% of arrested students graduate, while 49% of their similarly situated peers graduate.

Department of Education statistics also show that although students with disabilities made up only 12% of student enrollment nationwide, they comprised 23% of police referrals, 23% of arrests, and 67% of students placed in physical restraint, seclusion, and confinement.

In 2015, a school administrator strip searched an eighth grade female student in San Bernardino in front of a male officer. The vice-principal forced her to remove her bra. When she tried to cover her breasts, the vice-principal pulled her arms away. The student felt so violated after the incident that her grades plummeted.

In spring 2015, an officer at a South LA school approached a Black female student who was sitting on a bench with her leg raised. He told her “girls should not sit like that,” mocked her for wearing “boys’ clothes,” and told her that being gay was “shameful and wrong.” The student told the white male officer that white Americans have historically oppressed Black people, to which the officer responded by pushing the student against the wall and handcuffing her.

In May 2014, a school police officer in Oakland assaulted a high school sophomore with cerebral palsy. A classmate captured the incident on video. After the student did not comply with orders to go to class, the officer forcefully grabbed the student’s wheelchair and pushed him down the hall. The disabled student slapped at the officer’s hands and spit. The officer handcuffed the student to his chair, punched him four times, and threw him to the floor.

In 2011, school officials in Stockton asked an officer to meet with a five year-old student with disabilities to “scare him straight.” When the child had a tantrum, the officer zip-tied the child’s hands and feet and took him to a mental health facility.

In 2010 in San Mateo, an officer pepper-sprayed a seven year-old student with a disability after he refused to get down from the top of the bookshelf in his special education classroom.

The harmful practice of increased policing in schools exposes school districts to serious legal consequences. Lawsuits have been brought in many of these situations for violations under the U.S. and California Constitutions and civil rights laws. Specifically, police departments and districts have been sued for use of excessive force and discrimination based on protected classes such as race, gender, sexual orientation, gender identity, and disability. Courts have routinely found districts to be liable for the unlawful acts of police on campus, forcing districts to compensate victims and amend policies.

Many districts have conflicting, vague, or absent policies that provide little to no meaningful guidance to school staff on when to call police to campus or how to interact with police.

1. Most school districts give staff complete discretion to call police to address student misbehaviors that should be handled by school staff such as administrators or counselors, including:

Very few schools (4% or less in each category) have policies limiting police contact for rule-breaking or minor offenses.

3. California school districts provide inadequate guidance to school staff on what they should do when police officers question students on campus.

4. California school districts similarly do not protect students who are arrested or removed from campus by police.

5. An estimated 1/3 of districts do not require staff to keep any records of police-student interactions, such as the date and time of an interview, the officer’s and student’s names, and the reason the officer conducted an interview. Even the districts that require some data collection generally do not aggregate and systematically analyze the data to better understand the reasons why police are interacting with students.

6. Only very few school districts in California have policies that clearly describe the procedures by which students and families can complain about police practices or interactions.

1. Counselors and other school officials should handle bullying, harassment, disruptiveness, vandalism, drug and alcohol abuse, and other non-violent incidents. School staff should only call police when there is a real and immediate physical threat to students, teachers, or public safety.

2. School staff should consult with district legal counsel and receive consent before providing access to law enforcement officers who refuse to provide proper identification or written legal authority for their questioning or detention of a student.

3. Law enforcement officers seeking to interview students on campus must first secure consent from the principal and the student’s parents or guardians. The principal should provide consent only when the police officer has a judicial court order, except in cases where the student presents a real and immediate physical threat to students, teachers, or public safety. Students should have the right to have their parent, guardian, or adult of their choosing present during questioning, and interviews should occur in a private location, away from other students.

4. Districts should adopt clear policies about when police officers can arrest students or remove them from campus. Districts should authorize a student’s arrest or removal from campus only if an officers has a warrant or court order, or if the student presents a real and immediate physical threat to students, teachers, or public safety. The principal and parents or guardians should be notified of the arrest immediately. When possible, arrests should occur in a private location, away from other students.

5. School districts must keep comprehensive data about law enforcement interactions with students, disaggregated by race, gender, ethnicity, and disability status of the student.

6. School districts should establish a formal complaint process open to students, families, and community members who can use it to report incidents of possible police misconduct.