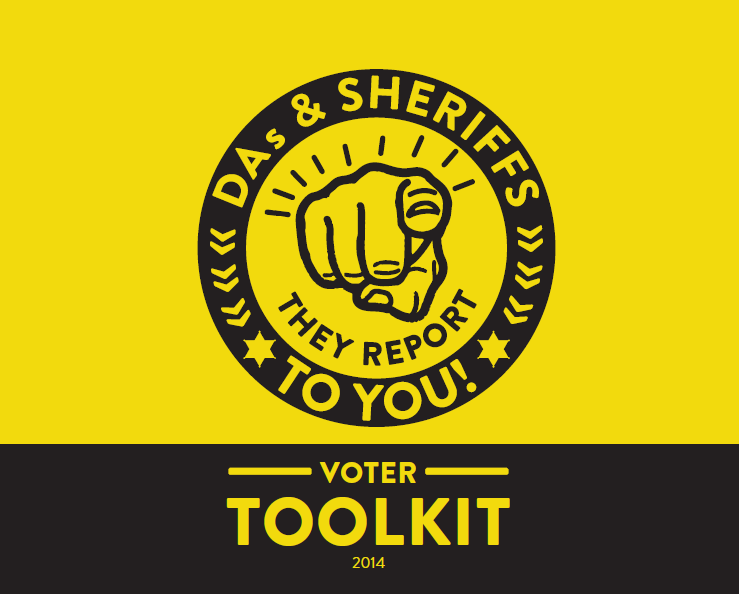 Who are the most powerful elected officials most voters have never voted for?

Answer: Your district attorney and sheriff

The DA and sheriff speak for you: What are they saying on these issues?

California continues to feel the impact of the worst budget crisis in its history. While vital services and education have been cut to the bone, the criminal justice system still accounts for one of the largest expenses in the General Fund. Over the last 20 years, California’s corrections budget has increased by 450%. We are locking up more people, at greater expense, despite decreases in crime rates.

District attorneys and sheriffs have the power to drive the costs of our prisons and jails through their choices about who to arrest, what charges to file, which plea bargains to offer, and who to keep in jail for how long. The community should be able to count on DAs and sheriffs to make decisions that protect both our communities and our tax dollars.

DAs and sheriffs also have a powerful presence at our state’s Capitol. They should use their influence to support evidence-based reforms to our criminal justice system that both increase public safety and save money.

Studies show that regardless of their race or ethnicity, people use and sell drugs at the same rate. However, African Americans and Latinos are more likely to be arrested and prosecuted for drug offenses. Additionally, some DAs and sheriffs choose to send non-violent drug offenders to jail rather than to substance abuse treatment programs that cost less, help people recover from the drug addiction, and reduce crime.

People who are convicted of low-level drug possession typically leave jail with a felony on their record. This felony conviction acts as a major barrier to obtaining a job, housing, food stamps, or grants for higher education.

District attorneys and sheriffs should ensure that drug laws are enforced fairly and equally, regardless of the color of your skin or your economic status. They should encourage drug treatment and other incarceration alternatives, which are proven crime-reduction tools. They should also support creating an option to charge simple possession as a misdemeanor instead of a felony, which would allow people every opportunity to get back on their feet and become productive members of society.

School discipline policies are implemented for the protection of our children while they are at school and to create a warm and welcoming environment for all students to thrive. When a school calls the police, the district attorney decides whether to prosecute the behavior as a crime or respond through another route such as school discipline. Sheriffs often hold discretionary power to recommend alternatives to incarceration for many juveniles. They can also recommend supervised mental health or treatment programs.

The DA also decides whether a child will be charged as an adult. Studies show youth charged as adults often grow up to be criminals: they re-offend more quickly, more seriously and at a higher rate than youth kept in the juvenile justice system.

Sheriffs and DAs should actively support alternatives to the criminal justice system for youth, such as mentor programs. They should apply their discretion in a fair and unbiased manner and support policies and local efforts to reduce the number of children in all communities who are brought into the juvenile justice system.

The district attorney and sheriff’s jobs necessitate a close working relationship with the police and Deputies in the Sheriff’s Department. But sometimes that relationship can get too close and can influence how they react to allegations of excessive force or misconduct.

The DA decides when to prosecute a law enforcement officer for using force that injures or kills. The DA also decides whether to pursue charges like resisting arrest against civilians in cases where officers used force. And the DA decides when to investigate and prosecute law enforcement for such crimes as planting evidence and lying in court. In these situations, the DA must act with independent judgment and in the interests of the community, and must not be influenced by special interests.

The DA and sheriff can play an important role in promoting cooperation and trust between law enforcement and the community, by supporting civilian oversight of law enforcement, and by promoting transparency in responding to allegations of police misconduct.

Rehabilitation programs and reentry support for people leaving jail and prison are essential to reducing victimization and violent crime. California currently has among the highest rates of repeat offending in the nation. Yet, because of the recent budget crisis, we have dismantled nearly all rehabilitation programs in prisons.

District attorneys and sheriffs should support effective rehabilitation programs, in prisons, jails, and in the community – programs that prepare inmates to successfully reenter the community, protect public safety, and reduce the costs of corrections. DAs and sheriffs should create and support programs that provide a second chance, particularly to young adults charged with non-violent crimes, or those with drug, alcohol, or mental health issues.

In 2011, the Supreme Court declared California’s prisons so severely overcrowded that the conditions violated the US Constitution. In response, the legislature created “realignment,” an effort to reduce prison populations by keeping low-level, non-violent offenders at the county level rather than send them to state prison.

Realignment presents a historic opportunity to implement alternatives to incarceration, such as mental health and drug treatment programs which will save money, reduce crime, and increase public safety. However, many counties have chosen to use realignment funds to construct new jails or expand existing ones, instead of investing this new money into community-based programs proven to rehabilitate. This will only recreate the same broken system that the state failed to fix.

While realignment is putting pressure on county jails, that’s because most jails have been crowded with people who are still awaiting their day in court. In California, 63% of people in jail have not yet had trial or been sentenced for the crime charged. Many of them simply cannot afford bail, a problem that disproportionally affects low income communities. Pretrial incarceration not only damages lives; it also damages the budget. It costs $100 per day to incarcerate someone.

The district attorney and sheriff serve on their county’s Community Corrections Partnership, a board of local officials who make important decisions about sentencing low-level offenders, pre-trial incarceration, and using realignment funds. They should use this momentous power to implement alternatives to incarceration, and develop community supervision programs for people awaiting trial.

Trust between local law enforcement and immigrant communities is essential to promoting public safety. California currently deports more immigrants who have no or only minor criminal convictions than any other state, often through local law enforcement collaboration with federal immigration authorities. This collaboration and other practices that particularly impact immigrant community members undermine trust in law enforcement; victims and witnesses do not report crimes when they fear doing so may lead to deportation.