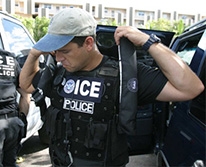 “Santa Clara’s detainer policy has been a beacon for immigrants’ rights throughout the United States since it was adopted in 2011. Rather than turning residents over to a deeply flawed immigration enforcement system based on their past offenses or charges, Santa Clara County can and should rely on its criminal justice system to decide questions of pretrial detention and post-conviction consequences for criminal conduct. By retaining its current immigration detainer policy, Santa Clara County will live up to its long-standing principles and policies of staying out of civil immigration enforcement and protecting public safety and civil and constitutional rights.”

Along with Cook County, Illinois, Santa Clara stopped holding people in local jails in 2011 if the detention was based solely on suspected immigration violations. California’s legislature explicitly contemplated and allowed policies such as Santa Clara’s when it recently passed the TRUST Act (AB 4-Ammiano), a bill to create minimum standards for enforcement of immigration detainer requests that limits local participation in immigration enforcement.

Santa Clara’s current policy saves the County from expending unreimbursed costs to hold people identified by ICE. Community organizations—and even the Sheriff—acknowledge the policy has increased community trust in law enforcement. Under the policy, crime witnesses and victims can approach local police without fear, making it easier for the police and sheriff to do their jobs.

Perhaps the most important reason to maintain the current policy is that the criminal justice system is better suited to providing fair and consistent outcomes to people brought into local custody. When local police are in the business of enforcing immigration detainers based on past convictions and current (unproven) charges,  community members are funneled into an inflexible and harsh deportation machine that fails to recognize individual circumstances.

Julia Harumi Mass is a staff attorney with the ACLU of Northern California.