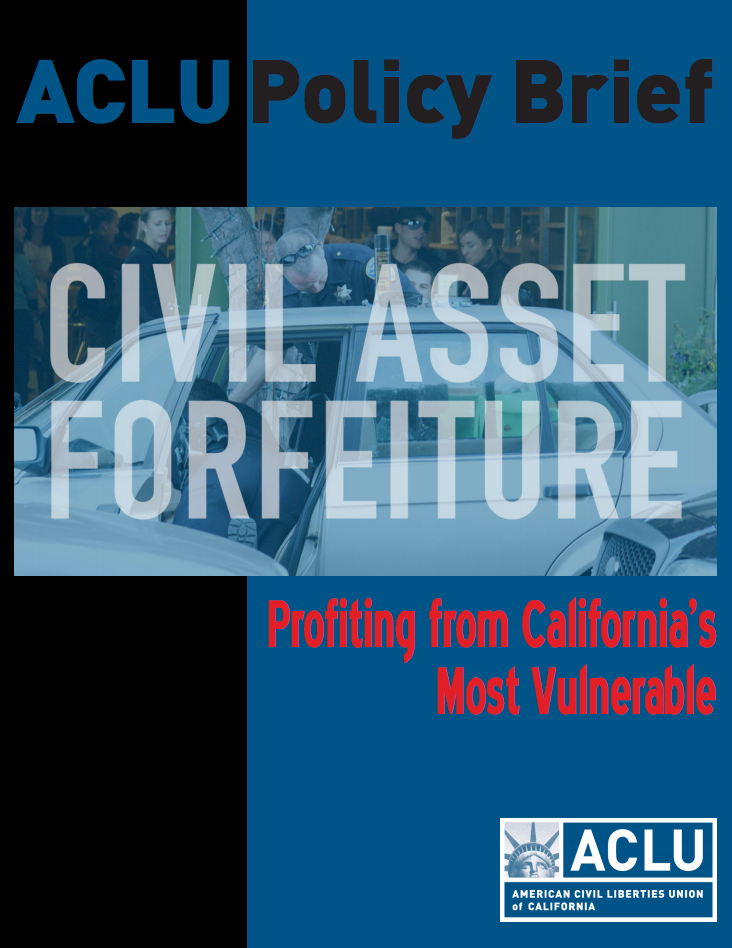 Did you know that in 2014 police took more property from people in the U.S. than burglars did? Frightening, but absolutely legal.

Police are allowed to take your money and property even if you aren't convicted of a crime, or arrested. California law enforcement agencies use federal civil asset forfeiture laws to plump up their budgets and unfairly target Californians.

A report we released today finds that, although this tactic of policing for profit can impact innocent people from all walks of life, people of color and those who can’t afford to fight the government in court are the ones who bear the heaviest burden.

The report found that:

Established in the heyday of the war on drugs—a.k.a. the war on low-income people of color—asset forfeiture laws were supposed to target drug “kingpins” by confiscating their cash and property. Instead, these laws, which allow law enforcement to keep a portion of what they take, have been abused by those who have a financial incentive to take Californians’ money and property even when they haven’t done anything wrong.

Policing for profit leaves Californians empty-handed and unable to get their hard-earned money or property back. For example, the Los Angeles Sheriff's Department confiscated $10,000 from a taco truck owner even though there was no evidence of a crime and the driver was not arrested or charged. A California judge ordered the money returned, but by then the money had already been transferred to federal jurisdiction. At that point, he was advised by his attorney to drop the case because fighting the U.S. Government is too expensive and has been known to morph from asset forfeiture into deportation of relatives or IRS involvement.

Fortunately, our state legislature has the opportunity to pass a bill that would forbid cops from permanently keeping someone's money or property unless that person was convicted of a crime. SB 443, introduced by Senator Holly Mitchell (D-Los Angeles) and co-authored by Assemblymember David Hadley (R-Manhattan Beach), would protect innocent Californians. The bill promotes a simple concept: if someone isn’t convicted of a crime, the government can’t take and keep their money or property.

Legislators are wavering in the face of the law enforcement lobby, which swarmed the state Capitol to make sure money would keep flowing from the pockets of hardworking Californians. The bill is still pending in the California Assembly and will likely be called up for a vote later this month.

Margaret Dooley-Sammuli is the Criminal Justice and Drug Policy Director with the ACLU of California.