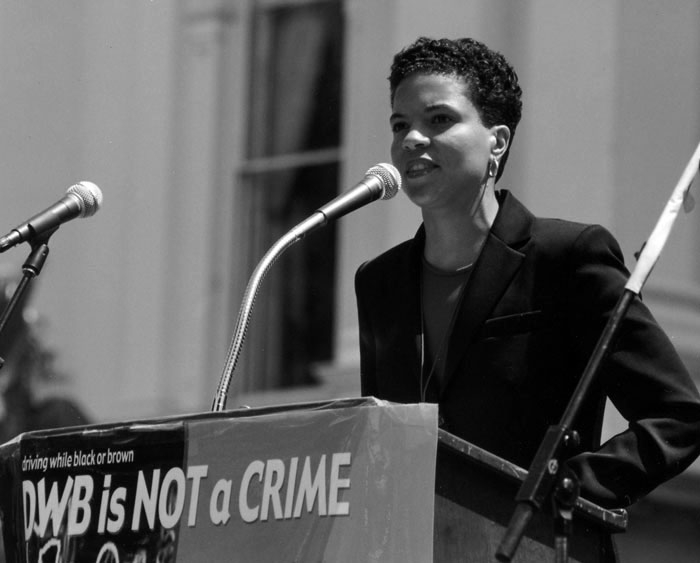 “I believe a great awakening is required,” said Michelle Alexander in a keynote address at Stanford Law School’s Shaking the Foundations Conference, "We have to wake up from our colorblind slumber and awaken to the realities of race in America."

After listening to Alexander’s address, I remember clutching my copy of The New Jim Crow under my left arm as I scrambled in search of a pen in my backpack. I eagerly joined the line of conference attendees waiting to shake hands, take photos or ask for her autograph. Despite how late into the evening it was, Alexander was not stingy with her limited time, nor refused to take photos or share in a quick exchange of words. Her generosity was equally remarkable as was her ability to make me reflect on my own life and role in the fight for social justice: “How will I shake the foundations?”

With hope for justice

After finally making my way to the front of the line, I introduced myself and explained that her book, The New Jim Crow, fueled my desire to join the Prop 47 campaign. The New Jim Crow: Mass Incarceration in the Age of Colorblindness explains how the criminal justice system functions as a new system of racial control through means of the war on drugs, employed to oppress people of color just as Jim Crow laws once did. In advocating for a more restorative approach to crime, she also critiques American society’s colorblindness as it rejects to confront how racial discrimination remains equally powerful as it did during the times of slavery and Jim Crow segregation.

She signed my book: “To Katherine, ‘With hope for justice.’”

Her research and work as a civil rights lawyer and activist continue the legacy of the movers and shakers of the 1960s Civil Rights movement. During this era, America witnessed the African American community join in solidarity to shake the foundations—structures that aimed to disempower black voices and refused to consider black history. Today, Alexander urges us to awaken ourselves from a “colorblind slumber” so we can reevaluate the caste-like foundations of today as not being so different than from the past.

Former director of the Racial Justice Project (ACLU-NC), Alexander directed and coordinated the Project’s litigation, media, lobbying, and grassroots organizing work. In 1998, the Project launched the “Driving While Black or Brown” campaign against racial profiling in California. They filed a class action lawsuit, Rodriguez v. California Highway Patrol, challenging CHP’s practice of targeting Latino and African American drivers pursuant to its drug interdiction programs. Continuing her work to address mass incarceration and the war on drugs, she secured a Soros Justice Fellowship in 2005, which supported the writing of The New Jim Crow. She currently teaches at the Moritz College of Law at The Ohio State University.

The ACLU-NC would like to recognize Michelle Alexander for actively awakening the American people from a “colorblind slumber.” She has reminded her listeners and readers to look back into African American history, in order to understand the history in the making today. In honor of Black History Month, let us both mourn and celebrate the lives of all black people whose lives were lost to racial and social inequality. Let us mourn the suffering from Bloody Sunday, but also cherish the marches that followed soon thereafter. Let us awaken “with hope for justice.” In honor of Black History Month, let us celebrate the lives and legacy of all those who joined together in solidarity for racial justice—in the past, in the present, and for the future.

Katherine Pantangco is an Organizing & Community Engagement intern with the ACLU of Northern California.