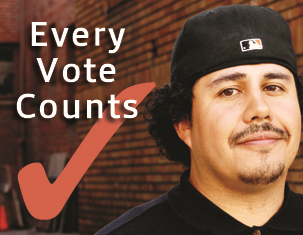 The right to vote is a fundamental right and all eligible individuals must be allowed to exercise their right. The California Constitution disenfranchises individuals on the basis of criminal conviction only if they are "imprisoned in state prison or...on parole as a result of the conviction of a felony." League of Women Voters of California v. McPherson, 145 Cal. App. 4th 1469 at 1486 (2006).

Despite the current uncertainty regarding voting with a felony conviction, the First District Court of Appeals decision in McPherson remains the law and clearly establishes that individuals convicted of a misdemeanor and individuals sentenced to felony probation retain the right to vote, even if confined in local jail.

Californians Sentenced Under Realignment Have the Right to Vote, Argue Civil Rights Advocates