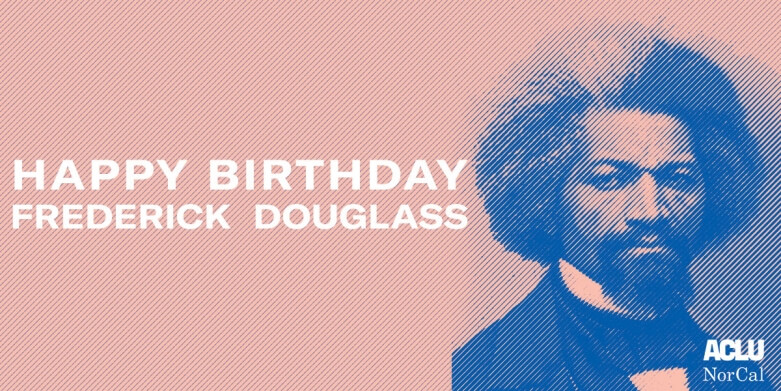 Today we honor the birthday of Frederick Douglass, a world-renowned abolitionist and steadfast supporter of human rights. Douglass was enslaved from birth, but escaped at the age of 20. His exact birthday is unknown as there were often no records kept for slaves.

I have no accurate knowledge of my age, never having seen any authentic record containing it. By far the larger part of the slaves know as little of their ages as horses know of theirs, and it is the wish of most masters within my knowledge to keep their slaves thus ignorant. I do not remember to have ever met a slave who could tell of his birthday.

— Narrative of the Life of Frederick Douglass, 1879

He lived his life in a relentless pursuit of justice, made only greater by the tremendous obstacles and violence he had to overcome. In the face of a system built to exploit and deny him human rights, Douglass became an educator, an agitator, a writer, a newspaper publisher, and a statesman who used his platform to condemn the racial injustice that ravages the United States.

In honor of his life and the movement he helped lead, we have asked members of our staff to read passages from Frederick Douglass’s work and reflect on the meaning of his words.

On the 200th anniversary of Frederick Douglass’s birth, we are still fighting for the values to which he devoted his life. His words, spoken over a century ago, give a hauntingly accurate portrait of America today.

Few evils are less accessible to the force of reason, or more tenacious of life and power, than a long-standing prejudice. Of all the races and varieties of men which have suffered from this feeling, the colored people of this country have endured most....In nearly every department of American life they are confronted by this insidious influence. It fills the air. It meets them at the workshop and factory, when they apply for work. It meets them at the church, at the hotel, at the ballot-box, and worst of all, it meets them in the jury-box....Everything against the person with the hated color is promptly taken for granted; while everything in his favor is received with suspicion and doubt.

One of Douglass’s most powerful speeches was delivered at an event commemorating American Independence. It was July 5, 1852, in Rochester, NY, and Douglass was asked to give the keynote address. He questioned why he was chosen for the task and then delivered a searing speech denouncing the holiday  as a hypocritical celebration of ideals that were denied to Black citizens.

The law on the side of freedom is of great advantage only when there is power to make that law respected.

— Life and Times of Frederick Douglass, 1881

Douglass’s life and work continue to illustrate the struggle of being Black in America. At the same time, his knowledge and resistance to oppression gives us hope that there are pathways to freedom. As Douglass famously proclaimed, “if there is no struggle, there is no progress.”

It’s all of our responsibility to continue Frederick Douglass’s legacy by speaking truth to power and fighting for racial justice in the courts, the legislature, the ballot box, and the streets.