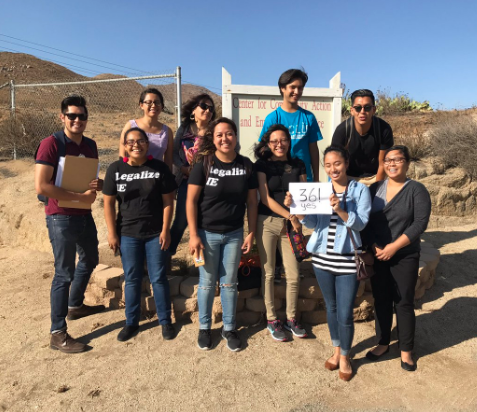 The Inland Empire region, made up of San Bernardino and Riverside counties, may be in California, but more often than not lands closer to Texas or Arizona when it comes to local immigration policies. Unlike other parts of the state, many of the region’s officials often do not reflect the views and needs of the almost four million people living here. There are not many “sanctuary cities” for immigrants in the Inland Empire. In fact, some local law enforcement agencies are eager to use local resources to make it easier for the federal government to carry out deportations that harm our communities every day. That’s why the passage and signing of the California Values Act (SB 54), a bill that limits local police’s involvement in deportations, is a huge victory for our local communities.

Take the case of Guadalupe Plascencia, a long-time U.S. citizen who was arrested earlier this year due to a misunderstanding. The San Bernardino grandmother was in county jail when a sheriff’s deputy asked her to sign documents acknowledging that federal immigration agents had asked about her. Notifying immigration agents of people’s release dates is an existing and deeply troubling practice in many parts of California (but is about to stop under SB 54, with some exceptions).

What happened to Guadalupe was unjust and unwarranted, but this type of “mix-up” is exactly the kind of problem advocates have long warned would happen when the federal government conscripts local police into becoming part of a mass deportation force. And it is one of the many reasons why we need SB 54 to protect people’s rights, and keep families together and communities whole.

It is estimated that about 300,000 undocumented immigrants call the Inland Empire home. Many are contributing to their local communities and the local economy working in logistics, service and agribusiness industries. Unlike our neighbors in Los Angeles, our region lacks the resources to serve a sizable and dispersed immigrant community. We are also positioned close enough to the Mexican Border to be considered a “Border Region” meaning local law enforcement agencies have often used Customs and Border Protection (Border Patrol) to “interpret” at roadside stops, funneling motorists into deportation centers.

Fear of raids – of open and even enthusiastic, collaboration between local law enforcement and federal immigration authorities – runs heavy for both documented and undocumented communities here as it does in many inland localities across our state.

Local law enforcement, in particular the Sheriffs in San Bernardino and Riverside counties, are fully entangled with immigration enforcement authorities and detain people on ICE’s behalf in our local county jails. In San Bernardino county, ICE agents are also allowed full and unfettered access to county jails. Nationally, 65-75% of deportations occur because of these entanglements.

Contrary to what some people might think, these kinds of misguided policies don’t actually promote public safety.  They contribute to feelings of mistrust towards law enforcement and ensnare people who are not born here or appear to be “foreign born,” just like in Guadalupe’s case.

But starting January 1, 2018, thanks to the increased protections guaranteed under the California Values Act (SB 54), incidents like the one that led to Guadalupe’s arrest and unlawful detention will come to a full stop whether local Sheriffs like it or not. Here is what the bill will do:

In the Inland Empire, the hard work continues and the victory represented by the California Values Act could not have come at a better time. ICE and CBP continue to gear up enforcement operations as we continue to document cases of people with no convictions or immigration violation history who are currently in deportation proceedings because the San Bernardino Sheriff’s notified ICE of their release. But just like we worked to get the California Values Act passed, we will continue our fight to make our voices heard and protect the rights of everyone that calls the Inland Empire their home.

Luis Nolasco is a Community Engagement & Policy Advocate for the ACLU of Southern California.