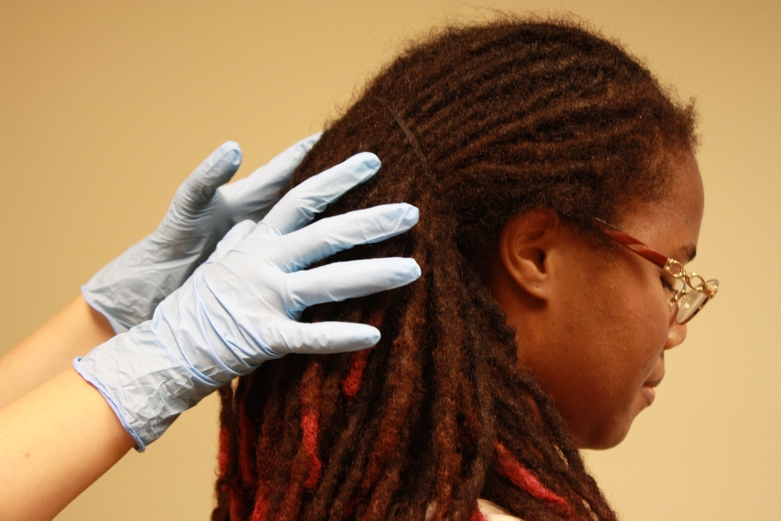 Malaika Singleton, Ph.D., a neuroscientist employed by the California State Senate at the time, was traveling to London as a U.S. delegate to the G8 Dementia Summit when she was selected two times for a hair pat-down by federal Transportation Security Administration (TSA) agents at the airport. After going through TSA's full-body scanner, TSA agents grabbed her hair and proceeded to squeeze it from top to bottom. Both times finding nothing, they allowed Malaika to continue on her way.

Malaika joins celebrities like Solange Knowles and lesser known individuals like Ashanté Reese who have found their hair, and by extension themselves, to be the target of TSA's prying eyes and hands. What do these individuals have in common? They are all black women whose hairstyles depart from the culturally white norm. Malaika with her sisterlocks. Solange with her afro. And Ashanté with her twists.

Like these women, I also have come under TSA's repeated scrutiny because of my hair. Within the span of a year, I was selected for hair pat-downs during three out of four trips. And on each occasion my hair was styled in locs. The first time I froze as a stranger groped my hair in the name of national security. The second time I was prepared for the intrusion. I identified myself as an attorney and asked the TSA agent to articulate TSA's hair search policy. She said TSA's policy is to search hair if a person has extensions. When I told her I didn't have extensions, she revised her statement. She said it was TSA's policy to search hair if the person has "extensions or abnormalities." Ouch. The TSA agent then retrieved her supervisor, who told me it was TSA's policy to search hair if the body scanner is triggered or the agent cannot "see [the passenger's] scalp."

Both the United States and California Constitutions prohibit unreasonable searches and selective enforcement of the law based on race. And although the law has carved out exceptions for airport screening, a search must still be tailored to detect threats to security. That legal requirement cannot be satisfied when there is no clear policy for detecting threats to security. When TSA agents are faced with ambiguous evidence or forced to apply subjective rules, it is more likely that they will unconsciously interpret the circumstances in a way that is consistent with racial stereotypes.

The problem of unconscious racial bias also permeates the field of law enforcement. This does not bode well for black people in an American society that struggles to reconcile itself with a history of slavery justified by notions of white supremacy. Although much explicit race-based decision-making has ended, implicit racial bias continues to manifest in racially discriminatory law enforcement practices. In fact, USA Today released data showing that black people "are far more likely to be arrested than people of other races, and in some places, dramatically so."

And it is not just law enforcement where implicit racial bias rises to the surface. Even in the world of fashion, black people are subjected to social and moral judgment for failing to subscribe to white norms. Fashion Police and E! News host Guiliana Rancic recently commented that singer Zendaya's locs "look[ed] like they smell like patchouli oil and weed" when Zendaya sported the style on the red carpet at the Oscars. Simply the image of a black woman defying white cultural norms about beauty and elegance activate racial stereotypes of black people as dirty and criminal. Although it is not deemed politically correct to explicitly endorse such stereotypes, they remain pervasive in many social institutions from law enforcement to entertainment.

To address the problem of TSA's discriminatory practices, the American Civil Liberties Union of Northern California filed an administrative complaint on behalf of Malaika to challenge TSA's discriminatory hair searches. TSA's Office of Civil Rights & Liberties agreed to conduct trainings for TSA employees at the airports where she was searched. TSA also committed to working with all of its airports to monitor them for consistent implementation of the federal government's nondiscrimination policies.

Similarly, monitoring of law enforcement at the state and local levels needs to happen in order to pinpoint and fix disparate policing practices. While an ignorant remark from the fashion police may be forgotten as yesterday's news, racial discrimination in law enforcement has a more harmful and enduring impact on black lives and society as a whole.

Has this happened to you?

If you think you have been subjected to discriminatory hair searches by TSA agents, please call the ACLU of Northern California's intake line at (415) 621-2488 or use this form.