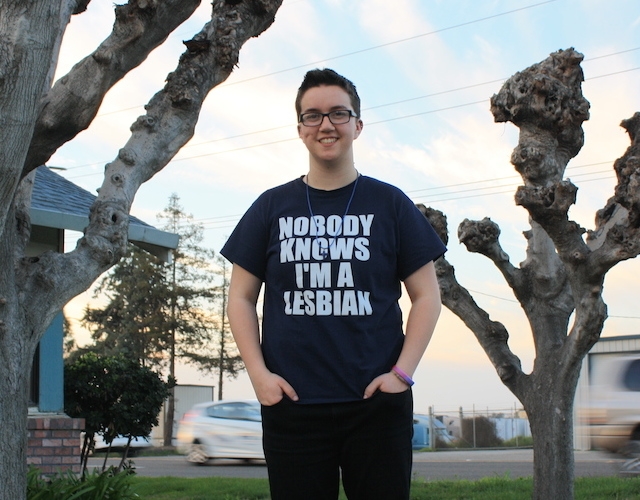 It all started with a t-shirt.

I was at the mall, and I saw a shirt I knew I had to buy.

It said “NOBODY KNOWS I’M A LESBIAN.” It made me laugh because pretty much everybody knows I’m a lesbian.

I came out a year ago, when I was in tenth grade. My friends at school are great. My parents are wonderful. When it comes to the adults at my school — the people who are supposed to be teaching us and encouraging us to be ourselves — let’s just say some are more supportive than others. I try not to be bothered by it, because I know I’m proud to be gay.

So that day at the mall, I bought the shirt. I wore it to school as soon as I could. I expected that maybe a few teachers wouldn’t be thrilled, but I’d felt pretty safe being out at school so far.

I made it through my first couple classes that day without a hitch. Most kids either didn’t even notice my shirt, or had only good things to say about it. But then, in third period, I was told the vice principal wanted to talk to me.

Oh no, I thought. How much trouble am I in?

I remember walking down to his office, knowing it was probably about the shirt, but wishing it wasn’t.

I was upset. The best way to describe it is that it was dawning on me that maybe I wasn’t going to be fully able to be myself at school.

I already knew what it felt like to keep my identity a secret. My junior year had just started — and I didn’t want to begin the year like this.

That was my mantra, and I carried it with me into the vice principal’s office.

Like I suspected, he told me I had to change my shirt.

He said that I wasn’t allowed to display my “sexuality” on my clothes.

That confused me. I knew there was nothing in the dress code that prohibited the word “lesbian” or “gay” or “straight” or anything else about sexual orientation. But when I told him that, he just insisted that I needed to either change my shirt, or go home.

So I called my dad, and he picked me up. I missed the rest of my classes that day.

By dinner time, I wasn’t just upset, I was angry. I knew my rights. I knew there was nothing wrong with my shirt. But I also knew if I wore it again, I could get suspended for willful defiance.

Over the next few days, both my dad and I met with the vice principal and the assistant principal multiple times. They didn’t budge. And their reasons for censoring my shirt were absolutely absurd.

They said my shirt was “disruptive” even though it obviously wasn’t. They said I wasn’t allowed to display my “personal choices and beliefs” on my clothing. And my favorite excuse of all — they said my shirt could be “gang related” and was an “open invitation to sex.”

My whole family decided that we had to take a stand.

Long story short, I contacted the ACLU of Northern California and they agreed to take my case. We sued the vice principal and the assistant principal for censorship.

I honestly thought the school would reverse their decision pretty quickly. But they didn’t. For months, while my lawyers worked hard on the case, I still wasn’t allowed to wear my shirt to school.

Which meant that every day I went to school knowing that “lesbian” — this simple, inoffensive word describing a core part of my identity — was supposedly a problem.

And it turns out my shirt wasn’t the only type of speech the school was worried about. The assistant principal told the ACLU lawyers that shirts that said things like “I support interracial marriage,” and “I believe in evolution” could also be against the dress code.

I’m very proud of who I am. That’s the whole reason I wore that shirt.

And it’s the reason I’ll keep wearing it — because after months of fighting this censorship battle, we won.

The school district agreed to change its policy. The dress code now clearly says that our clothes can express our own identity and our support for other students’ identities. All of this is already allowed under the Constitution, but it seems like the school needed an extra reminder.

So now it’s school policy that I can wear my “Nobody knows I’m a lesbian” shirt. And my friends can wear shirts that say “I support LGBT rights.”

Actually, that’s not a bad idea! Excuse me, while I go buy some new shirts…

Taylor Victor is in the 11th grade at Sierra High School in Manteca, California (where she and all her other classmates have a right to free speech because the Constitution says so). She is represented by the ACLU of Northern California.