From Louisiana to California Shootings, We Fight for Justice and Demand that #BlackLivesMatter 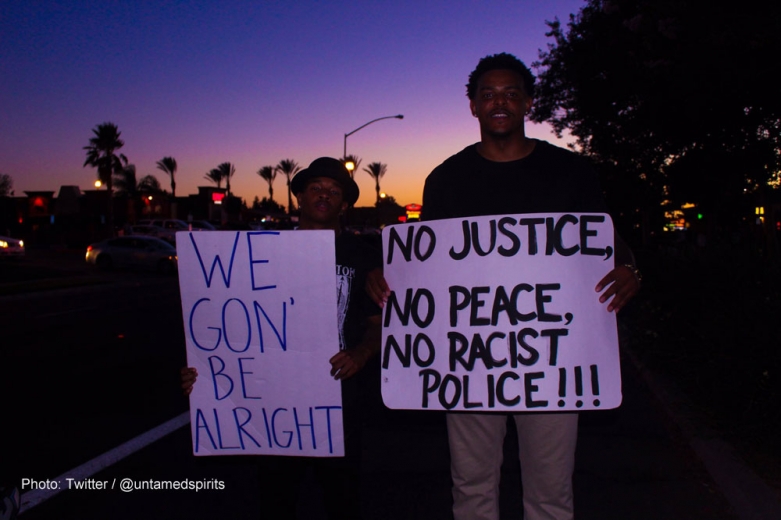 Update (July 14, 2016): Yesterday, Fresno police released the body camera footage of the shooting of Dylan Noble. The footage raises serious questions about the shooting. We continue to be concerned about the police culture of secrecy and lack of clear body camera policies in Fresno.

Last week, every morning brought us more tragic, maddening, horrific news of Black people and Latino people being shot to death by police officers. Of five police officers killed in Dallas. Of more deaths that should never have happened.

In Dallas, as in cities and towns across the U.S., people gathered to call for transformation and to demand that Black Lives Matter. From the news reports, it seems that Dallas police were using good practices to protect people’s right to protest. But during the peaceful protest, a lone gunman opened fire and killed five officers. As the Black Lives Matter Network wrote, “this is a tragedy–both for those who have been impacted by yesterday’s attack and for our democracy.” The Dallas shooting was a tragic loss of life and an assault on people’s constitutional right to protest government wrongs.

Though the relentless news cycle paints each set of shootings as two sides of the same coin—the result of individuals committing senseless acts of violence—it’s a false equivalence. It’s misguided to try to make sense of these killings while ignoring the larger, complex context: centuries of violence against Black people by the state, baked into dominant culture, embedded and reproduced in institutions.

There is so much more to say and feel, but right now, I need to take a moment for the deaths at the hands of police outside and inside California. What is foremost in my mind is the profound limitation of the laws and rules and policies our organization is working so hard to change.

A problem of systemic racism

Yet again, we’re faced with the fact that the killing of Black people and people of color by law enforcement is not a question of isolated incidents, but a problem of systemic and institutional racism.

The staggering amount of violence we continue to face points to a terrible reality. This criminal justice system protects the constitutional rights of only some, suppresses the rights of others, and enables police violence against communities of color. While our organization believes that change within the world of laws and policies is important, the solutions this country needs cannot be reduced solely to that arena.

From the violent deaths, to the mental and emotional trauma of the news, to the risking of lives to record and broadcast videos over social media in the hope for justice, all of this is an assault on Black and brown dignity and life.

As Justice Sotomayor wrote in her ringing dissent in a ruling on unlawful searches last month:

We must not pretend that the countless people who are routinely targeted by police are “isolated.” They are the canaries in the coal mine whose deaths, civil and literal, warn us that no one can breathe in this atmosphere… Until their voices matter too, our justice system will continue to be anything but.

Here in California, I mourn the death of Anthony Nunez, 18 years old, so close by in San Jose. Though we don’t have all the details yet, that he had a learning disability and that he was in mental health crisis both raise serious questions about how these officers interacted with him. Police violence against people with disabilities is real, and it interlocks with racism in policing.

Police violence disproportionately hurts people of color, but last week also brought news of other victims of police shootings. In Fresno, where the police department has a long pattern of secrecy, cell phone video just surfaced of the fatal police shooting of Dylan Noble, a 19-year-old white teen. The chief still refuses to release the names of officers involved or any body camera footage of the shooting.

And on Thursday, Clovis police officers shot and killed 33-year-old Adam Smith, a white man, in the process of serving a warrant.

Family, friends, and all of us deserve to know both how police came to take these precious lives and what was at the bottom of the Dallas shooting. But regardless, we know that too many people are dying at the hands of a racist system that goes well beyond policing, and it has to stop.

I wake up every day to bring about the world of justice we so urgently need. Even in times like these, I commit to a world of dignity and respect. Together, we can continue to make that world possible.