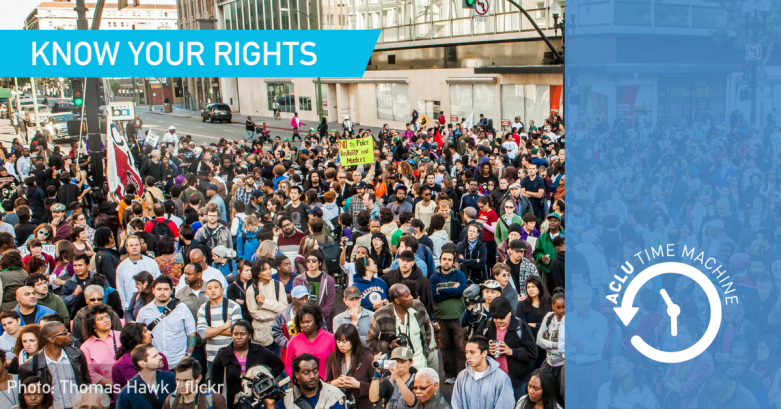 Leading up to the election, last-minute get-out-the-vote pleas were everywhere: “Vote Tuesday. Protest Wednesday, Thursday, all weekend if you want.”

In response to the news of Donald Trump’s election as president to the United States, people have already gathered, rallied, and protested – and continue to do so – everywhere from New York to Oakland.

You have the right to speak out, today and every other day. But what exactly does that mean when you decide to demonstrate? What’s allowed and what’s not? What about civil disobedience and direct action?

Today, we’re reminding everyone: be informed. Know your rights to demonstrate. Know when your rights have been violated and what to do – read, print, and share our new demonstrators’ rights wallet cards here.

In this #ACLUTimeMachine blog, we’re flashing back to 1993, when the ACLU won an important victory for protesters on the heels of another flashpoint in American politics.

On a March night in 1991, George Holliday stepped onto his balcony and saw police beating a motorist on the street below. He then pulled out a video camera and filmed an incident that would become synonymous with police violence: the beating of an African American man named Rodney King by several Los Angeles Police Department (LAPD) officers. News stations across the country broadcast the footage of King lying on the ground as officers viciously kicked and struck him repeatedly with nightsticks.

The footage showed a version of policing that white residents rarely experienced in LA, but that communities of color have endured for so long and still do. The video made it impossible for LA residents – and the rest of the country – to ignore police violence against people of color and Black people in particular. In the aftermath of the beating and the subsequent acquittals of LAPD officers who beat King, people across the U.S. rose up in pain and anger at the injustice.

On May 8, 1992, San Francisco police officers arrested nearly 400 people en masse who were protesting police violence and racism following the acquittals of the LAPD officers. These hundreds of people were demonstrating ten days after the first acquittals in the King beating and a week after the end of the State of Emergency that San Francisco had set in response. The police officers first blocked protesters off, then surrounded and mass arrested the crowds of people marching on the street.

The ACLU of Northern California sued the City of San Francisco to protect the rights of these demonstrators to speak out, with assistance from the law firm of Pillsbury, Madison & Sutro. According to Alan Schlosser, then Staff Attorney and now Senior Counsel with the ACLU of Northern California, “the ACLU brought this case because there was no justification for the mass arrest of hundreds of innocent people.”

In December of 1993, the ACLU of Northern California and the City of San Francisco reached a settlement agreement that would compensate everyone arrested in the May 8 demonstration and wipe their arrest records from that day. The City agreed to pay a total of $220,000 to the people arrested. The settlement helped to push the City to better protect the constitutional right of people to speak out.

We continue to defend your right to demonstrate, day in and day out.

And we continue to share vital information about your rights. When you know what the law says, you can better protect yourself.

Check out our new printable demonstrators’ rights wallet cards, and our other Know Your Rights guides!