Repeating Mistakes of the Past: Anniversary of the Chinese Exclusion Act 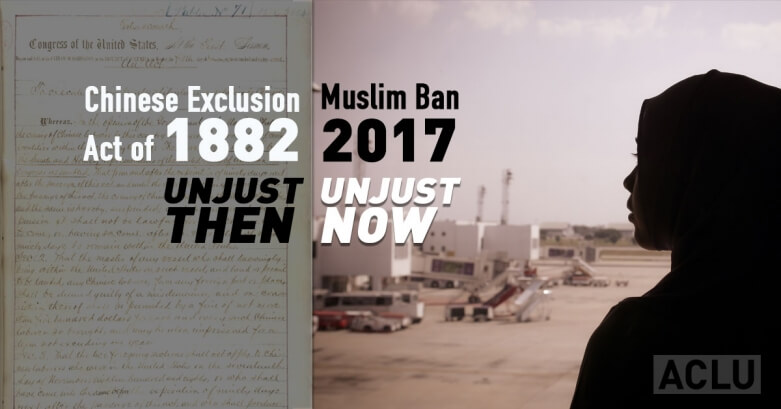 May 6 marks the 135th anniversary of the Chinese Exclusion Act, a law passed by Congress and signed by President Chester Arthur on May 6, 1882.  It was one of one of our country’s first immigration laws that legitimized racism as policy.

The act, which restricted the immigration of Chinese people, was the result of years of racial hostility by white anti-immigrant extremists and was based largely on myths about immigration’s effects on the economy.

You’d think we’d have moved past these anti-immigrant policies, but President Donald Trump is repeating history by attempting to institute dangerous discriminatory laws that ban people from this country. This time they’re not only based on race, but on the falsehood that certain religious groups are more prone to violence.

Though it has been blocked by the courts, the Muslim ban was a shameful attempt to circumvent laws that prohibit discrimination. The Constitution protects everyone in this country, citizens and noncitizens alike. Laws that punish immigrants violate fundamental rights to fair and equal treatment.

It took more than 60 years to repeal the Chinese Exclusion Act. We can’t risk that again. We will continue to resist all policies that discriminate against people based on race or religion. They do not make us safer, they undermine American values. Laws that exclude immigrants were unjust then, and they’re unjust now.