Time for a New Vote on San Jose Police Drones 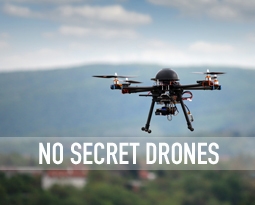 The San Jose Police Department (SJPD) is clearly getting ahead of itself. Despite there not having been any sort of public debate about whether or not to use a drone at all, the department today issued a statement saying it will develop policies and procedures for its deployment.

With the history of police abuses in San Jose, the question should not be how to deploy a drone, but rather whether or not a drone should ever be used in San Jose.  The San Jose City Council needs to bring the drone issue back for a proper public debate and a new vote.

Today’s SJPD statement also confirms concerns that it will expand drone use and underscores the need for public debate and a new city council vote on whether a drone should ever be used in San Jose.

The SJPD told the city council that it was approving a drone for “hazardous material investigations.” But in its statement today it says it wants to use it for any situations that it believes will “threaten public safety.”

Community members deserve to be able to voice their concerns about drones and other invasive surveillance technologies at the beginning of the process, not learn about it nine months later.

When communities are considering drones or other technology that can easily be used to invade privacy, the public expects to know what’s happening and have meaningful opportunities to weigh in early in the process.

The San Jose City Council needs to bring the drone issue back for a proper public debate and also reform its procedures to ensure that the public knows what’s happening and has meaningful opportunities to weigh in at the beginning of the process, not learn that the city has bought invasive surveillance technologies well after the fact.

Nicole A. Ozer is the director of the Technology and Civil Liberties Project for the ACLU of California.