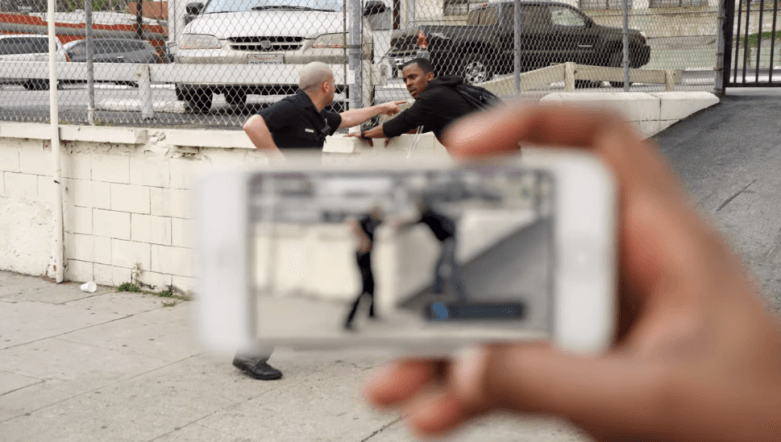 Imagine: You pull out your phone to record police misconduct—suddenly, your camera just doesn’t work. Turns out, your phone’s camera has been disabled by an infrared emitter. Apple’s newly patented technology may make this possible. The technology places an infrared sensor in your phone that has the potential to be disabled remotely. While the technology is being promoted as a tool to prevent the filming of copyrighted material, we think it has the potential to undermine efforts to hold law enforcement accountable.

Smart phones have played an important role in raising awareness of police misconduct, especially when it comes to the disproportionate treatment that people of color and LGBT individuals face by law enforcement. It was a smart phone video, after all, that revealed that a police officer lied when filing his report after fatally shooting Walter Scott in South Carolina. Such videos have also played a role in the investigations of other instances of criminal misconduct, including the death of Eric Garner and the fatal shooting of Mario Woods by SFPD. Smart phones captured police officers pepper spraying peaceful protestors at UC Davis.  The list goes on. It’s not just smart phones either: Police departments everywhere have either considered or implemented the use of body cameras to keep both law enforcement and citizens accountable for their actions. In short, video evidence is proving to be an invaluable tool for keeping law enforcement in check—that’s why we need more of it, not less.

Here in California, technology is playing an important role in efforts to hold police accountable. Last year, the ACLU of California launched a mobile application that streamlines the process for recording law enforcement and reporting misconduct directly to the ACLU. Moreover, efforts made by lawmakers this year sought to make internal police records—including videos—subject to public disclosure. Though these efforts have not moved as quickly as many would like, they represent a step in the right direction. The possibility that infrared emitters can be used by law enforcement, however, is a step in the wrong direction.

Concerns have already been raised regarding the potential for this infrared technology to censor dissidents during political protest. The problem is also a local issue. If law enforcement gets a hold of this technology, it could be used to prevent individuals from recording traffic stops, arrests, and other interactions between law enforcement and the public. Depending on if and how Apple’s new patent becomes a technological reality, that’s a very real possibility.

With law enforcement's recent focus on circumventing user protections in Apple products, it would be prudent for Apple and any other companies to strongly consider the civil rights impact before moving forward with this technology.

Nicole Ozer is the Technology & Civil Liberties Policy Director for the ACLU of California.