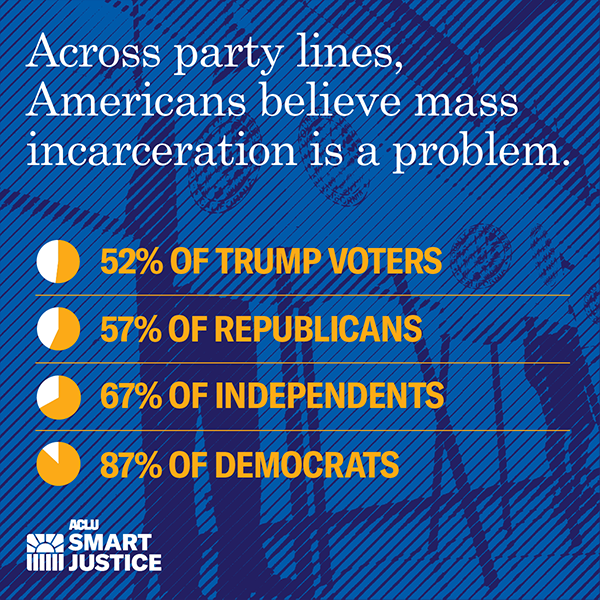 The research, conducted by Benenson Strategy Group between October 5 and October 11, included 1,003 telephone interviews with Americans across the U.S. 41 percent of participants identified as conservative, 31 percent as liberal, and 23 percent as moderate. Respondents were asked about their views on the size of the prison system, mandatory minimums, whether incarceration makes communities safer, how to respond to mental illness and drug addiction within the context of the criminal justice system and including in circumstances involving violence, and what types of policy positions voters seek from their elected officials. The poll shows a remarkable level of agreement between Americans of varying political parties and demographics.

“Americans reject President Trump’s 1990s-era tough-on-crime approach and overwhelmingly believe in a different and smarter approach,” said Udi Ofer, deputy national political director and Campaign for Smart Justice director at the ACLU. “Our poll demonstrates near-consensus support for criminal justice reform, including reducing the prison population, reinvesting in rehabilitation and treatment, and eliminating policies like mandatory minimums. Americans believe that resources should be shifted from incarceration to rehabilitation. Americans also believe that racism in policing, prosecution, and sentencing drive inequities in the criminal justice system.

“The data is clear — when it comes to criminal justice, Americans want reform and rehabilitation, and reject President Trump’s outdated political playbook. Trump and Sessions are out of touch with what voters want, including in their own party.”

The poll also asked Americans about their views on how the criminal justice system should respond to offenses involving violence. 61 percent of Americans believe that people who have committed crimes involving violence can turn their lives around. 61 percent of Americans also believe that people who suffer from drug addiction and commit serious crimes don’t belong in prison but should be in rehabilitation programs where they can receive treatment. And a large majority of Americans (87 percent) believe that when people with mental health disabilities commit crimes that involve violence they should be sent to mental health programs where they can receive treatment from professionals.

For a copy of the full poll and toplines, please contact Mia Jacobs at mjacobs@aclu.org.

The ACLU Campaign for Smart Justice is an unprecedented, multiyear effort to reduce the U.S. jail and prison population by 50% and to combat racial disparities in the criminal justice system. We are working in all 50 states for reforms to usher in a new era of justice in America.

This statement is online here: https://www.aclunc.org/news/91-percent-americans-support-criminal-justice-reform-aclu-polling-finds