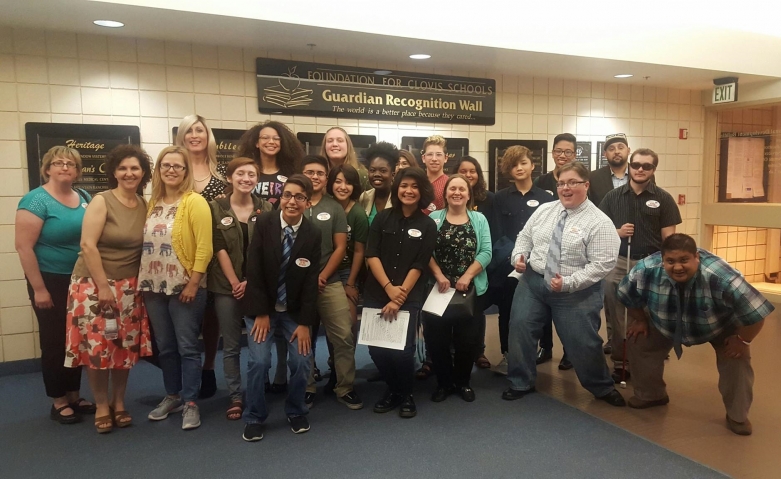 (Clovis, CA, April 5, 2016) On Wednesday, April 6, the Clovis Unified School District Governing Board will convene to vote on removing gendered provisions of its student dress code. Tomorrow’s meeting follows a vote on January 27, 2016, where the Board unexpectedly kept in place an outdated dress code that discriminates against students based on gender, gender expression, race, culture, and religion.

The Clovis Unified School District’s current dress code bans long hair and earrings for male students, “exotic clothing and makeup,” hairstyles that “cause undue attention,” and beards. These provisions can all lead to unfair targeting of transgender and gender nonconforming students by limiting or punishing their gender expression. They can also limit student free speech and religious expression.

The new proposed language still enables bias against students of color. For example, the proposed version still bans “exotic” makeup and dress‐‐a vague provision that opens the door to discrimination based on gender expression, national origin, religion, and more. Additionally, the dress code guidance for cultural, religious, or personal exemption is unclear and subject to individual school administrators at whose discretion students may be punished based on their cultural and religious expressions. This means that even with a favorable outcome on Wednesday, the school district will still be placing an unfair burden on students to justify who they are just to be able to learn.

Preceding the planned vote to remove the bans on gender expression in the dress code, ACLU of Northern California attorneys and GSA student leaders have led a joint effort to communicate to the school board that the current dress code is discriminatory and illegal. GSA Network and the ACLU of Northern California call on the school board to approve the changes, then swiftly bring the dress code into full compliance with the law.

“GSA student leaders have been bringing attention to this outdated dress code in a number of ways, from purposely flouting it to highlight the ways that it is discriminately enforced to delivering a student‐led petition with more than 3,500 signatures to the February 24 meeting of the Board. The student advocacy, along with the ACLU’s involvement, has been instrumental to getting us to another vote on the policy,” says Marc Navarro, Fresno GSA Organizer for GSA Network.

The April 6, 2016 meeting will begin at 6:30 p.m. and will take place in the Professional Development Building, Boardroom, 1680 David E. Cook Way, Clovis, California. Community members who are interested in attending the board meeting can also sign up for public comment during the time allotted for the dress code agenda item. Representatives from GSA Network and the ACLU of Northern California will attend along with GSA student leaders.

The ACLU of Northern California is an enduring guardian of justice, fairness, equality, and freedom for all Californians. We make change through impact litigation, legislative advocacy, and fearless organizing that connects over 100,000 activists and members in communities across California. Nationally, the ACLU has worked for almost 100 years to make sure that our basic Constitutional rights – to free speech, to privacy, to be innocent until proven guilty – exist in practice, not just on paper.