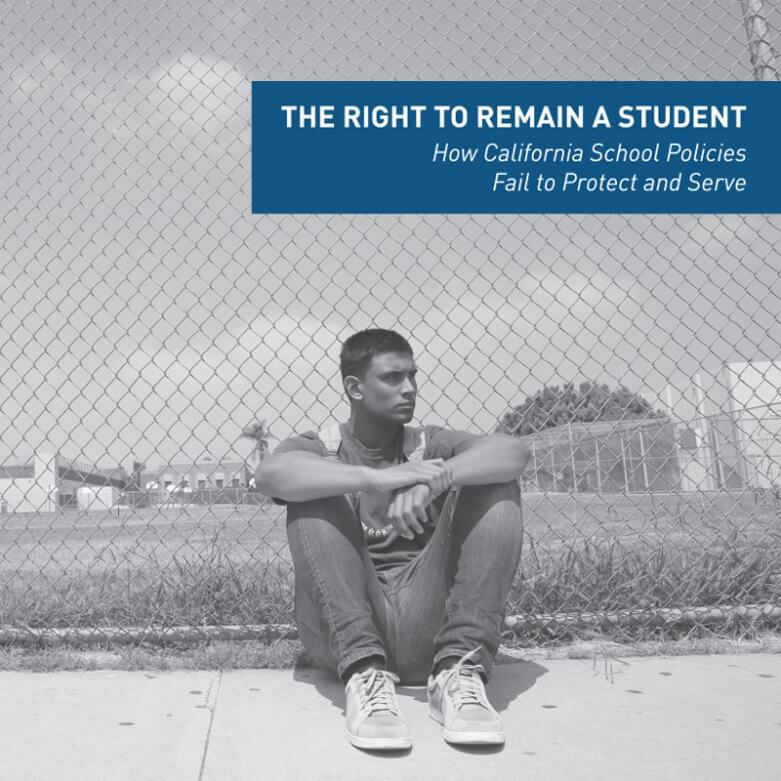 Los Angeles – Vast policy disparities among California school districts on how and when to summon law enforcement officers to campuses expose students to improper arrests, detentions, and possible violations of their civil rights, according to a new report from the ACLU of California.

The report, The Right to Remain a Student: How California School Policies Fail to Protect and Serve, finds that school officials are increasingly calling on law enforcement to deal with student misbehavior such as disruption, truancy, bullying, vandalism, and other violations of campus rules, often leading to arrests and feeding students into the growing school-to-prison pipeline.

Among some of the civil rights concerns addressed in the report:

“We also find that many districts have failed to adopt firm policies on interactions between students and law enforcement, which encourages school officials to rely on police, rather than principals, counselors or other administrators, to enforce discipline,” said Sylvia Torres-Guillén, director of education equity for the ACLU of California. “In many cases districts have adopted policies requiring staff to call the police to address even minor disruptions or violations of school rules.”

The ACLU of California firmly believes that school districts and law enforcement agencies should never permanently assign police officers to school campuses. These officers are not sufficiently trained to deal with the needs of young people overall and disabled students in particular. In one especially egregious case, a district police officer in Stockton zip-tied the hands and feet of a 5-year-old with behavioral problems and took him to a mental health facility. In another case a police officer called to a San Mateo school pepper-sprayed a 7-year-old with disabilities after he refused to climb down from the top of a bookshelf in his special education classroom.

The report recommends a number of reforms:

“We are committed to safe school environments where students and staff build trust and all students feel included and supported, not anxious that police officers may handcuff and arrest them or their classmates for common misbehavior and behavioral problems caused by disability,” said Linnea Nelson, staff attorney with the ACLU of California.

The Right to Remain a Student is being released in conjunction with Dignity in Schools’ National Week of Action, a coordinated effort by more than 100 organizations to end the school-to-prison pipeline.