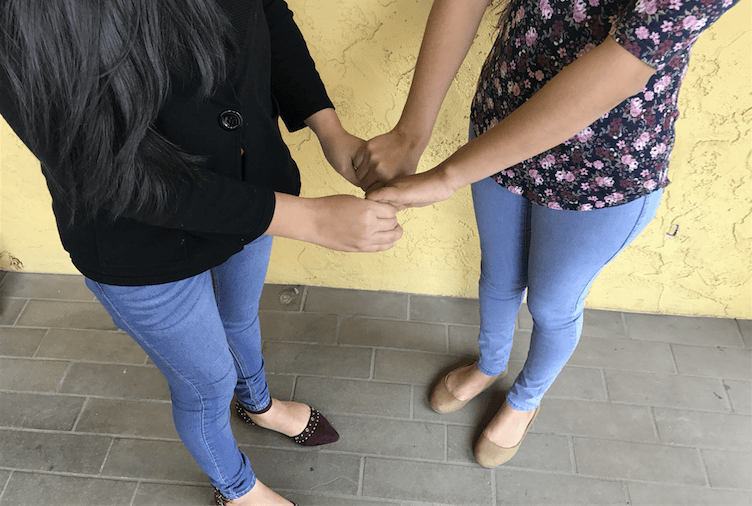 Warning: This piece contains descriptions of sexual assault experienced by the author by a U.S. immigration officer.

I had heard rumors about the challenges faced at the U.S. border, and I understood the consequences of choosing to cross in hopes of a better future. None of that mattered, though. My sister and I were determined to escape Guatemala. After thinking and talking about it over and over, we made the move last July. We boarded a bus and took it all the way to the Texas-Mexican border, praying for a safer and more peaceful life.

By the time we made it to the U.S. border, we were so excited. We had made it to the land of opportunities, the country where human rights were protected. We understood arrest and deportation were a possibility, but — for the first time in many years — we felt confident that no one would hurt us.

Unfortunately, I realize now that we made many false assumptions. After crossing the border, we got lost. Thankfully, or so we thought, we spotted two U.S. immigration officers and asked them for help. The officers said they would help us. They asked us to raise our hands, shake out our clothes, and took our backpacks before taking us to a Customs and Border Protection station.

Once we arrived at the station, my sister and I were asked to remove our shoes, questioned, and then placed in a holding cell. We were left there with only one CBP officer. The CBP officer took me to what seemed like a closet. The room had no windows or furniture and had food in it. It seemed like a pantry, which made me wonder why he brought me here. The whole situation felt strange from the beginning.

Once in the closet-like-room, the officer blocked the door and asked me to remove my sweater, shirt, and tank top. He said this was to make sure I wasn’t carrying anything illegal. But he didn’t stop there. He lifted my bra, placed his hands inside, and caressed my breasts.

He then demanded I remove my pants and tights. I tried to calm him down and reassured him I had nothing to hide, but he started to forcefully pull down my underwear. He touched me inappropriately, running his hand over my vagina. I was so scared and confused — I couldn’t understand why he was doing this. It clearly wasn’t necessary for security purposes. Now that I look back, I feel so stupid that I let it happen. And I now realize it was all for his own enjoyment.

A few minutes later, the same officer took my younger sister, who was just 17, into the same room. My sister emerged the same way as I had: crying and terrified. My sister is just a kid — I never thought he would do to her what he did to me. To this day I still can’t believe it. I feel so guilty. We thought we had left a world of violence and oppression, only to realize immigration enforcement officers in the United States appeared to be no different than law enforcement in our home country, abusing the tremendous power and responsibility that comes with their job.

Watching us cry, the officer attempted to calm us down with chocolates and potato chips. He was hoping we wouldn’t make a scene, containing the tears caused by his outrageous behavior and therefore keeping him from getting in trouble.

The shame and hurt we felt in that room are indescribable. The thought of an immigration enforcement officer touching my most intimate body parts without my consent breaks me. I have suffered every day from this experience that it has been extremely hard to sleep at night. There have even been some days when I feel like I shouldn’t be alive.

I’ve been having regular counseling sessions, which have helped a lot. But I want this officer and any other CBP officer who commits this kind of abuse to be punished.

When I first reported the incident, it took all of my inner my strength to reveal what had happened. I recounted the episode, and my sister and I later provided written statements. They even made us draw a depiction of the closet where it happened. But finally, after everything, I don’t believe the CBP officer was even disciplined.

That is why today, my sister and I have chosen to file a claim against the officer. We’re doing this with the hope that no one else will ever be sexually assaulted by CBP officers, or any law enforcement. Telling this story isn’t easy for me, but I want to help others that are thinking of crossing the border. What happened to us is NOT normal; it is NOT part of protocol; and it is NOT legal. No one, no matter the situation or their background, deserves to go through this.

Since the incident, I’ve come to learn that Customs and Border Protection is the largest law enforcement agency in the United States and, through the ACLU, that many children trying to escape from trauma and abuse in their home countries often experience additional abuse and mistreatment in the hands of these U.S. border agents. Unfortunately, few people know this. CBP often refuses to own up to its actions and hides the reports of abuse and doesn’t reveal if officers are disciplined.

I hope to forget what happened to us and move on. But this border officer and CBP need to be held accountable.

* Clarita is a pseudonym used to protect the identity of our client.