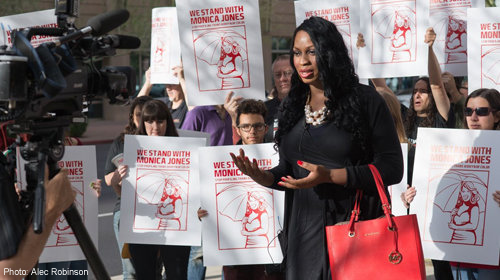 It seems basic enough to ask that one be treated like a human being – that a person’s dignity be honored in life and death.

But tragically for too many transgender people that is still a far off dream.

The past few weeks have witnessed another series of horrors for the transgender community. Three transgender women of color have been murdered: Lamia Beard in Norfolk, Virginia; Ty Underwood in Tyler, Texas; and, Ms. Edwards in Louisville, Kentucky. Their murders are part of the systemic violence that trans people experience; violence that is disproportionately levied upon transgender women of color whose lives exist at the intersection of racism, sexism, and transphobia.

Adding further indignity to the violence of their deaths, local media reports have erased the existence and dignity of these fallen sisters referring to them incorrectly as “men dressed as women” and by names that don’t honor who they were in life and death. As Chai Chai Jindasurat, programming coordinator with the National Coalition of Anti-Violence Programs, told BuzzFeed News: “The harm of the media misgendering and victim-blaming is that it sends a message to the public that these homicides are not as serious, and that somehow transgender people deserve it.”

Are the lives of trans people less worthy of respect in life and dignity in death?

Thankfully, despite this violence and ongoing efforts to demean and erase trans people – like this Oklahoma bill that would require people to disclose whether they have had “sex reassignment surgery” when seeking a marriage license – the trans community continues to show incredible resilience in fighting back.

This week, in the midst of the violence the community has faced, we also received word of a key victory in the fight against police profiling of transgender women of color as sex workers.

A superior court judge reversed the conviction of Monica Jones, a black transgender activist, who was found guilty in April 2014 at a bench trial of “manifesting” intent to solicit an act of prostitution. This reversal comes after mobilized efforts, led by Monica, to draw attention to the targeting of trans women for arrest by police in Phoenix and across the country. With the support of Laverne Cox, the ACLU, and others, Monica used her story to speak for so many others suffering the injustices she had experienced.

Of her victory, Jones said:

My conviction being vacated is important, but it is a small win in our larger fight for justice. There are so many trans women and cisgender women who might be charged under this law in Phoenix and similar laws across the country. There is so much more work that needs to be done so that no one will have to face what I have, no matter who they are or what past convictions they have.