Interrupting Surveillance in Silicon Valley and Beyond 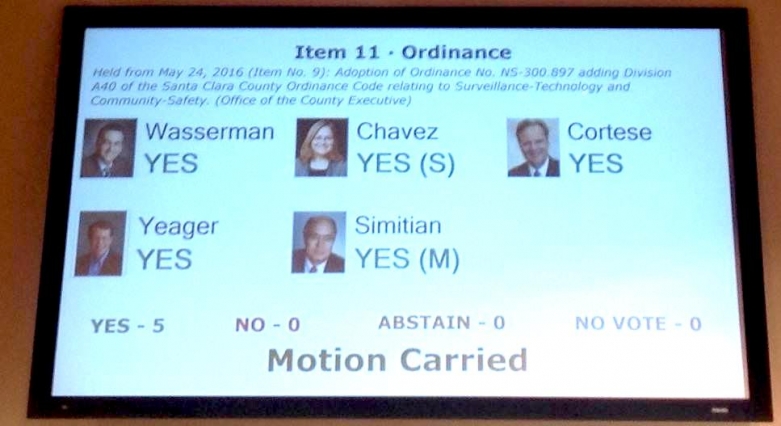 Public cynicism about government is at an all-time high – and we all know the reasons. That's why it's pretty remarkable when activists use public government processes to attack a scary and overwhelming problem like surveillance – and it works.

Bay Area activists have seized on a strategy to localize the fight against government spying and enlist city councils and county supervisors – who are far more approachable and accountable than remote DC officials – as allies in building community control of surveillance equipment. City by city and county by county, transparency regulations are being discussed. As the motto of one of the most active community groups in the country Oakland Privacy says, “I've Been Watching You Watching Me."

With a virtually untapped flow of militarized equipment and techno-gadgets from the federal government into local cities and counties, watching the watchers is exactly what hasn't been going on. The use of surveillance equipment has been anything but transparent, rarely discussed, pushed through on consent calendars and sometimes even legally hushed up, as was the case with the notorious non-disclosure agreements applied to “Stingray” cell phone interceptor equipment.

Now that is starting to change.

Bay Area activists including Media Alliance, a 39-year-old media watchdog concerned about the transformation of the Internet from a tool for connection into a spying dragnet, went into the belly of the beast of technological innovation – Silicon Valley – to talk transparency and community accountability (as laid out in the ACLU of California's guide for communities, Making Smart Decisions About Surveillance).

The first thing that happened was Santa Clara County's planned acquisition of a notorious “stingray” cell phone interceptor device collapsed, after public scrutiny about whether the country had a privacy policy or any usage regulations in effect for use of the fake cell phone tower on the city's residents. Then under the able leadership of Supervisor Joe Simitian, the county passed in June of 2016 the first global transparency equipment ordinance in the United States. The historic ordinance established pre-purchase approval, required use policies, annual accountability audits and consequences for abuse - for all spying equipment, past present and future.

Santa Clara may have been the first, but they won't be the last. Supported by community activists who are challenging every local municipality to do what Santa Clara did, transparency legislation is spreading widely.

Just here in the Bay Area, Alameda County delayed a stingray upgrade until the development and passage of one of the strongest cell phone interceptor use policies in the country and is considering a global equipment ordinance. In neighboring Berkeley, the venerable university town passed an approval of concept for surveillance equipment transparency. BART, the region's rail transit agency is developing a comprehensive privacy policy for its cameras and license plate readers. Palo Alto, home to Stanford University, has expressed the need to develop city policy. Santa Rosa, the Sonoma County capital, whose acquisition of social media monitoring software just surfaced via an ACLU public records request, is responding to community inquiries about surveillance activities.

This buzz of activity reflects two things: genuine public anxiety about the extent of spying and surveillance and the commitment of community groups to engage to recover some control over how they are watched and profiled.

It is possible to interrupt the seemingly inevitable mushrooming of blanket surveillance.

This guest blog is by Tracy Rosenberg, the Executive Director of Media Alliance (www.media-alliance.org).