This Surveillance Software is Probably Spying on #BlackLivesMatter 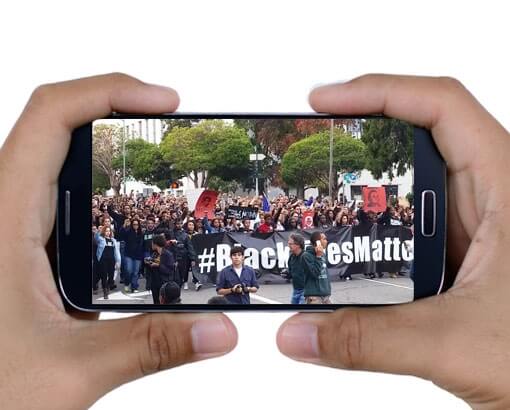 We just got a pile of public records from the police department in Fresno, California. They show that in the last two years, Fresno police have been using several different brands of social media surveillance software – all without the public’s consent.

What’s worse, the ACLU has discovered that Fresno police have been using an especially offensive piece of software called MediaSonar, which encourages the police to identify “threats to public safety” by tracking #BlackLivesMatter-related hashtags.

Social media surveillance software comes in many forms, but it generally works by automatically scanning huge batches of publicly available posts on networks like Twitter, Instagram, and Facebook. This kind of surveillance can place people under suspicion simply for speaking their mind online.

Earlier this year, activists from the ACLU chapter in Fresno sounded the alarm and brought our attention to Fresno’s use of social media surveillance software called Beware. According to news reports, Beware’s mysterious algorithm was assigning “threat levels” to residents. Local advocates wanted to learn more. So we sent a Public Records Act request to find out how Fresno police were tracking social media, and what they did with the information they gathered.

In response, the police department sent us 88 pages of documents about its experiments with social media surveillance software. The documents raise a number of unanswered questions about social media surveillance at the local level. How many people are being surveilled? How long is their data being stored? How do these intrusive programs gather and interpret information?

Although we still don’t know exactly how the Beware algorithm works – and neither does the Fresno Police Department, apparently – we do know that it gathers information on a person’s publicly available social media activity, and assigns them a threat level of green, yellow, or red. Marketed as a source of insight for officers on the ground, this mysterious software can label people as threats based on inaccurate information. For instance, a Fresno city council member was recently incensed to learn that Beware lists his residence at threat level yellow.

Social media monitoring is part of a pattern of unchecked surveillance. It’s yet another surveillance tool being used without transparency or accountability. And it risks targeting communities that are already vulnerable to police misconduct – especially communities of color.

Which brings us to MediaSonar. Promotional materials from MediaSonar encourage the surveillance of hashtags like #blacklivesmatter, #dontshoot, and #imunarmed. In an email to Fresno Police, the company’s co-founder announced that these “keywords” could “help identify illegal activity and threats to public safety.” During the same time period that Fresno tested MediaSonar software, Black Lives Matter activists took to Fresno’s streets to call for reform.

The idea that people could be labeled as “threats to public safety” simply for objecting to police violence is chilling. But it’s not the first time – recently, the Department of Homeland Security and the Oregon Department of Justice were caught secretly monitoring Black Lives Matter activists’ online activities.

Protestors shouldn’t have to wonder whether what they write online or post on social media will brand them as a threat in the eyes of law enforcement. The government shouldn’t be collecting a digital record of people’s lives. And police surveillance plans shouldn’t be rushed forward with the public left out of the loop.

As police departments across the country consider using intrusive new surveillance tools, here’s the thing to remember – we don’t have to stand for it. We have a right to determine how law enforcement acts in our communities.

And Fresno residents are right to demand reform, including the adoption of an ordinance that ensures the public has a meaningful chance to weigh in before decisions about this or any other surveillance technology are made.

Technology is changing the way we communicate and organize around powerful ideas. At the forefront of these innovations are movements like #BlackLivesMatter. While the way in which our society expresses itself is shifting, the principles of the First Amendment remain unchanged. Advances in technology are not an excuse for new forms of unaccountable surveillance.