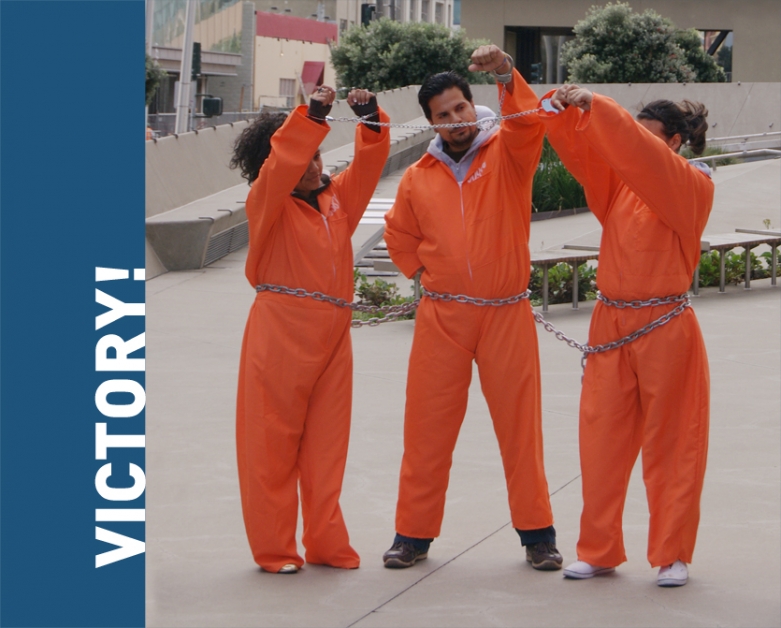 Hard to believe, but until recently, all detained immigrants appearing in the civil immigration court in San Francisco were forced to give critical testimony while restrained by shackles and chains at the wrists, waist, and ankles. The inhumane practice was particularly problematic for asylum seekers and immigrants who had suffered from torture and domestic violence in the past—and it was unnecessary since the majority of immigrant detainees appearing in civil court proceedings are peaceful individuals.

In August 2011, the ACLU of Northern California, the Lawyers' Committee for Civil Rights, and Wilson Sonsini Goodrich & Rosati sued the federal government over its inhumane policy. After over two years of litigation, during which 16 plaintiffs shared their painful experiences, U.S. immigration authorities have agreed to a near-total reversal of their shackling policy in San Francisco immigration court.

Going forward, detained immigrants will appear at their individual hearings free of shackles unless an emergency situation arises. Shackles will still be applied at preliminary hearings where immigrants appear in large groups, but even then, individuals will be able to request accommodations for special physical, psychological, or medical conditions.

The stakes are high for detained immigrants appearing in immigration court. The testimony they give in court is their best chance to win the right to remain in the United States and avoid permanent separation from family or deportation to countries where they fear for their lives.

Most detained immigrants have no history of violent or disruptive behavior. Immigrants almost uniformly reported feeling humiliated and demeaned when they appeared in court in shackles, often in front of their loved ones and sometimes small children. Some felt so agitated that they could not concentrate on their hearings. For others, like plaintiff Uelian De Abadia-Peixoto, the shackles brought back painful and distracting memories of past trauma.

Civil immigration detention is demoralizing and dehumanizing. Detention centers are often in remote locations and telephone access is severely limited. Many immigrants are held in effective isolation from their families and attorneys. Some who suffer from serious medical and mental health conditions are denied the treatment they need. And detained immigrants in northern California continue to be subjected to hours of shackling while being transported to and from the courthouse.

The ACLU of Northern California will continue to work on each of these ongoing problems. In the meantime, this settlement is expected to directly affect more than 6,000 immigration detainees over the next three years and to be a model for litigation and policy across the United States.

This historic settlement provides basic dignity to immigrants during some of the most decisive moments of their detention. In all aspects of detention and especially in critical court proceedings, every person deserves to be treated like a human being.

Jenny Zhao is the Liman Public Interest Fellow at ACLU of Northern California.