Alex Nieto, Black and Brown Lives, and the Need for Policing Reform 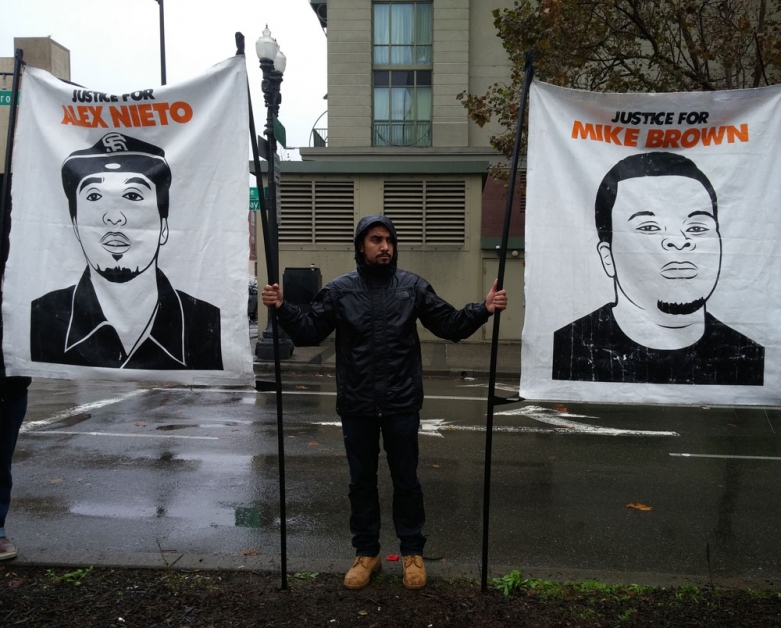 The officers fired 59 bullets at Nieto. At least 14 rounds landed and caused his death.

The D.A.’s Office concluded that the officers’ actions were “clearly reasonable” because Nieto was carrying his licensed Taser, which the officers mistook for a gun. He had the Taser because he was a security guard on his way to work.

The killing of Nieto, and other black and brown males, such as Tamir Rice and Ezell Ford, seems all too familiar.

Indeed, their deaths have made many wonder whether differences in the ways police interact with people of color and whites should be viewed as the product of systemic injustice, rather than mere lapses.

Would Nieto and others of color still be alive if they were white?

With fairer skin, would their deaths have been deemed legally justified in absence of prosecutions?

At least one recent poll gives credence to the idea that the results of these cases may have turned on race. It found that most Californians (55%) believe that blacks and other people of color are treated less equally than whites in the criminal justice system. Residents of the San Francisco Bay Area, where Nieto was killed, are the most likely (62%) to hold that view.

This perspective is not restricted to everyday people. Last week, for instance, FBI Director James Comey declared that “[m]any people in our white-majority culture have unconscious racial biases and react differently to a white face than a black face.”

In light of this sentiment – that our system of justice is racially unjust – a pressing civil liberty issue for Californians to consider is what reforms would help ensure that marginalized people are more adequately protected?

To add, how might community trust in law enforcement be advanced?

In 2000, California enacted a bill that banned racial profiling by law enforcement.

However, in 2002, Michelle Alexander, then-Director of the ACLU of Northern California’s Racial Justice Project, authored a report which found that our state’s racial profiling statute had no practical effect because it required nothing more than the constitutional minimum.

That same year, the Legislative Analyst’s Office (LAO) concluded that California’s definition of racial profiling was too vague. It added that, because of such vagueness, some law enforcement agencies resisted following the definition and recommended that it be revised.

Since then, the federal government, states and localities around the county have considered or adopted anti-profiling measures that seek to prevent discrimination by law enforcement through the following:

In his speech, FBI Director Comey questioned whether Americans can “address concerns about ‘use of force’” and “officer-involved shootings if we do not have a reliable grasp on the demographics and circumstances of those incidents?”

He added that “we simply must improve the way we collect and analyze data to see the true nature of what’s happening in all of our communities.”

In California, all state and local law enforcement agencies must report any death that occurs in custody to our state Attorney General. Such reports include deaths that occur during arrest as a result of a use of force.

However, the Attorney General’s Office has not publicly disseminated the information it receives on a routine basis.

California can start resolving its law enforcement use of force problems through the following:

At bottom, the recent death of Nieto and many other people of color at the hands of police has exacerbated distrust in law enforcement.

In absence of public trust, the legitimacy of law enforcement is placed in question, if not downright undermined.

To restore confidence, and better understand how to improve community safety, robust reform and transparency on racial profiling and use of force policies and practices is necessary.

We cannot wait any longer.

Chauncee Smith is a Racial Justice Advocate with the ACLU of California Center for Advocacy & Policy.