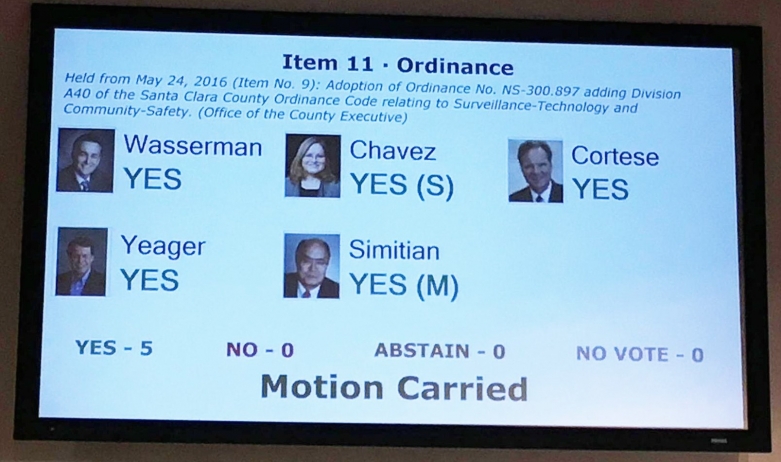 Santa Clara County has passed a landmark law to stop secret and discriminatory surveillance. Yesterday, the Board of Supervisors unanimously approved the Surveillance Technology & Community Safety Ordinance and became the first county in the nation to institute consistent transparency, accountability and oversight measures for all surveillance decisions.

While unchecked and discriminatory surveillance is not a new problem, communities and their lawmakers understand that we are in a unique and important moment for action. In recent decades, communities have been increasingly blindsided by billions of dollars of government grants down to local law enforcement to buy invasive surveillance technologies. The federal and state funds have circumvented traditional budget oversight mechanisms and led to the expansion of surveillance without limits and safeguards for rights.

The passage of this new law comes on the heels of San Jose's secret acquisition of a drone, the Santa Clara Sheriff's attempt to quietly buy an invasive cell phone tracking device, and revelations that Fresno and Bay Area police departments have been using social networking software that monitors Black Lives Matter activists. All of this happened with little to no transparency – which is not unusual. According to our 2014 survey, only 15% of California communities publicly debated new surveillance technology purchases and only 1 in 5 surveillance programs had any policies to protect against misuse.

New state laws have also instituted transparency and oversight measures for automated license plate readers and cell tracking devices. But not surprisingly, Silicon Valley's local lawmakers made sure the law passed today was future-proof by creating consistent rules for all the surveillance technology that currently exists and those we know will come.

(1) Informed Public Debate & Board Approval at Earliest Stage of the Process – Public notice, production and distribution of an easy-to-understand Surveillance Impact Report and opportunity for meaningful public input prior to seeking funding or otherwise moving forward with surveillance technology proposals;

(2) Determination by Board That Benefits Outweigh Cost and Concerns – The Board expressly consider costs (fiscal and civil rights) and determines whether surveillance technology is appropriate before moving forward.

(4) Ongoing Oversight & Accountability – Proper oversight of surveillance technology use and accountability through annual reporting and public review by the Board.

The law, authored by Supervisor Joe Simitian, resulted from more than a year of collaboration and a process that included county officials, local residents, diverse organizations, and the work of County Counsel. Working together, these stakeholders carefully crafted language that properly balances power and responsibilities. The new law includes a narrow “exigent circumstances” exception limited to use by law enforcement in emergencies involving danger of death or serious physical injury.

We applaud this historic step towards empowering residents in decisions about surveillance technology. The critical support of our partners at the Asian Law Alliance, the Council on American Islamic Relations - San Francisco Bay Area, the Electronic Frontier Foundation, Media Alliance, Oakland Privacy Working Group, Restore the Fourth, and the San Jose Peace and Justice Center were key to its passage.

Going forward, the ACLU will be watching to make sure county officials work to further the purpose of this law.  We will also continue to work with communities throughout California to make sure surveillance technology proposals are subject to transparency, accountability, and oversight mechanisms and that civil rights safeguards are in place.

Nicole Ozer is the Technology & Civil Liberties Policy Director for the ACLU of California.