Cops in the Club: SFPD’s Racism and Bigotry Don’t Mix with SF Pride 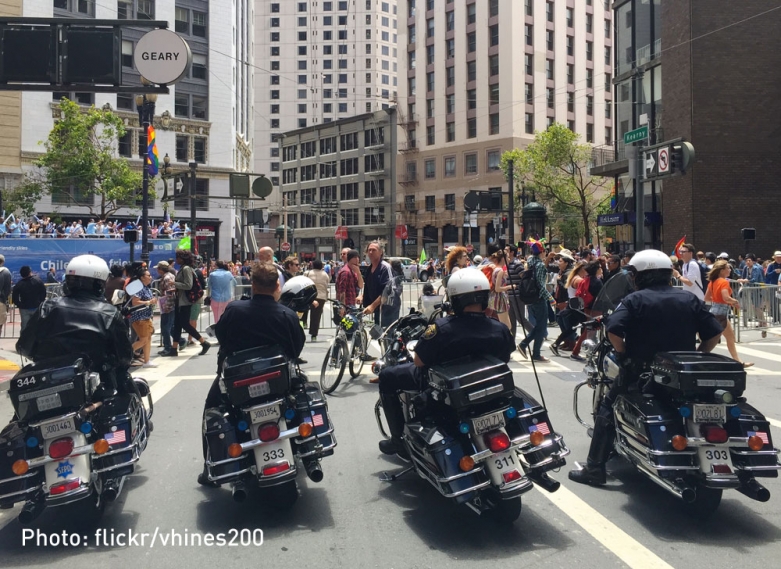 The decision by SF Pride and the City of San Francisco to dramatically increase police presence at this year’s festivities creates a dangerous situation for LGBT people of color, the exact communities the organizers are recognizing with their 2016 theme, “For Racial and Economic Justice.”

Cited as a response to the recent massacre of 49 people at a Latinx themed night at the Pulse club in Orlando, the “safety measures” will include an increase of federal, state, and local officers on the street, undercover police in LGBT clubs, and wands and metal detector screening at the festival at Civic Center.

The increased policing was facilitated by SF Pride, the same organization that rightly welcomed Transgender Gender-variant Intersex Justice Project (TGIJP) an organization led by transgender, gender-variant, and intersex people of color — inside and outside of prisons, jails and detention centers, to be a community grand marshal. Also being recognized is St. James Infirmary, an organization dedicated to supporting sex workers. These organizations work with people who face continuous state violence and criminalization.

Bringing in more police, especially undercover officers, is not the way to promote racial and economic justice.

The history of pride is rooted in rioting against bigoted police and has been led by LGBT youth of color. And the LGBT people in this city, especially LGBT people of color, deal with regular profiling, discrimination and harassment by law enforcement.

As we have seen time and time again, there are systemic problems within the SFPD that must be addressed. Increasing the number of officers on the streets will not only alienate and prevent people from coming to celebrate but may put those who do show up in danger.

A 2015 report by the San Francisco Human Rights Commission on violence prevention found high levels of mistrust of police among LGBT community members of color.

While the SFPD promotes the message that San Francisco is a welcoming city for the LGBT community, it fails to point out the history of racism and bigotry within its ranks. This is the same police force that was recently in the news again when officers were exposed for exchanging racist and homophobic texts. This is the same police force that treats people of color as enemies and arrests black people in dramatically higher numbers. This is the same department that had its police chief dismissed because his officers continue to murder people of color in the streets.

Racism and bigotry are alive within the SFPD. We can’t let this hate play out on our streets in an event themed “For Racial and Economic Justice.”

To keep San Francisco’s LGBT communities of color safe would mean systemic change to end the deep-rooted failures of the SFPD in interacting with marginalized communities. If they can’t be held accountable now, we should not be increasing their presence at SF Pride.

Cops in the clubs won’t make people feel safer. And SF Pride should not be an excuse to over police the city’s most vulnerable communities.