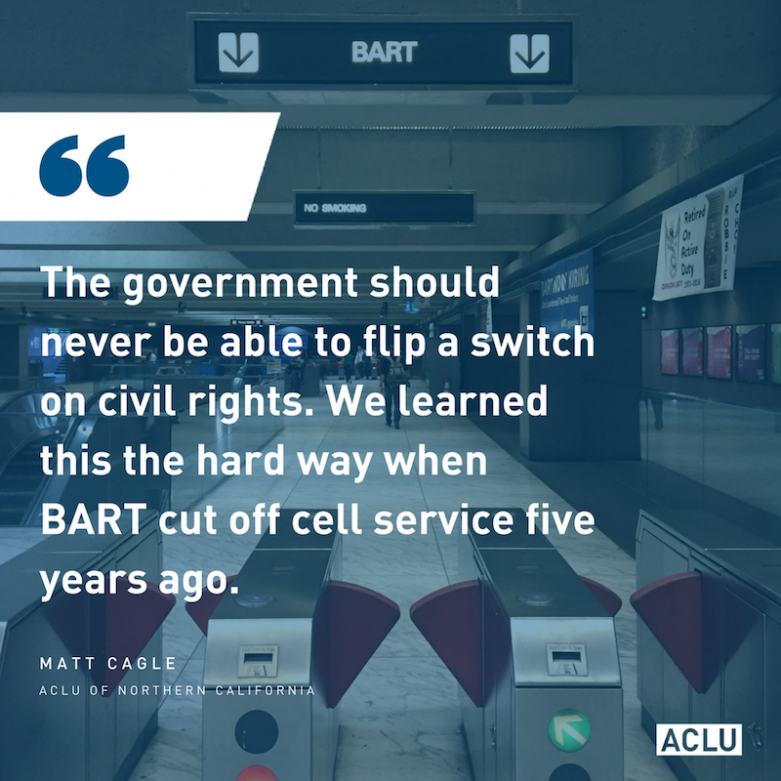 On Aug. 11, 2011, BART made the unprecedented decision to shut off cell service at multiple stations. Officials meant to disrupt plans for a protest of a homeless man’s shooting by BART police, which is troubling enough. But BART’s actions also left scores of riders without the ability to communicate with loved ones, engage in social networking, or contact authorities in an emergency.

At the time, the ACLU called BART’s actions what they were - unconstitutional government censorship. Five years later, the BART cell shutdown fiasco continues to serve as an important lesson that without community oversight, technologies can easily be misused.

Today, more than ever, cell phones and technology are a central part of our exercise of constitutional rights and oversight of government. The cell phones in our pockets and purses have become an indispensable way to record abusive policing and even stream events live for the world to see.

As a result, innovative use of technology is playing a central role in social change.

As we’ve seen far too often in recent years, heartbreaking eyewitness footage is helping document incidents of police misconduct that would otherwise be concealed. On the ground, activists are using Twitter and messaging services to organize and publicize protests. And by posting videos, spreading memes, or posting essential commentary, people are telling their own stories in the face of government violence. As a result, our society is taking a long-overdue look at police violence across the United States and here in San Francisco.

But technology is not inherently positive – it’s just a tool. Its impact depends on who is using it, and who it’s being used against.

The continued proliferation of new technologies means we must keep a watchful eye on government use. Although a California law now restricts BART’s ability to shut off cell service, BART still has immense potential power to restrict free expression, invade privacy, and violate civil rights.

Right now, BART controls an arsenal of surveillance technologies including automated license plate readers and on-board surveillance cameras. As the law stands, BART’s Board of Directors aren’t required to take a close look at police purchases of new and invasive technologies. No limits exist to prevent use of surveillance to disrupt peaceful protests, track riders, or share data with other law enforcement agencies.

The lack of robust public oversight of BART’s surveillance capabilities is risky and invites abuse. Without it, BART would easily be able to demand the Facebook deactivate the accounts or streams of protesters, like Baltimore police did last week. And only community oversight can prevent the purchase of future technologies that prevent the recording of police conduct altogether.

But in the wake of Santa Clara County’s groundbreaking surveillance ordinance, BART appears ready to take serious steps to protect the civil rights of its riders. Community members have asked for a voice in how BART police acquire and use surveillance technologies. Next week, a BART committee will consider an ordinance requiring transparency, accountability, and oversight for all such equipment.

The government should never be able to flip a switch on civil rights. We had to learn this the hard way when BART cut off cell service five years ago. But new technologies will emerge, and continued oversight by residents will be essential to ensuring they aren’t misused.

Matt Cagle is a Technology & Civil Liberties Policy Attorney with the ACLU of Northern California.