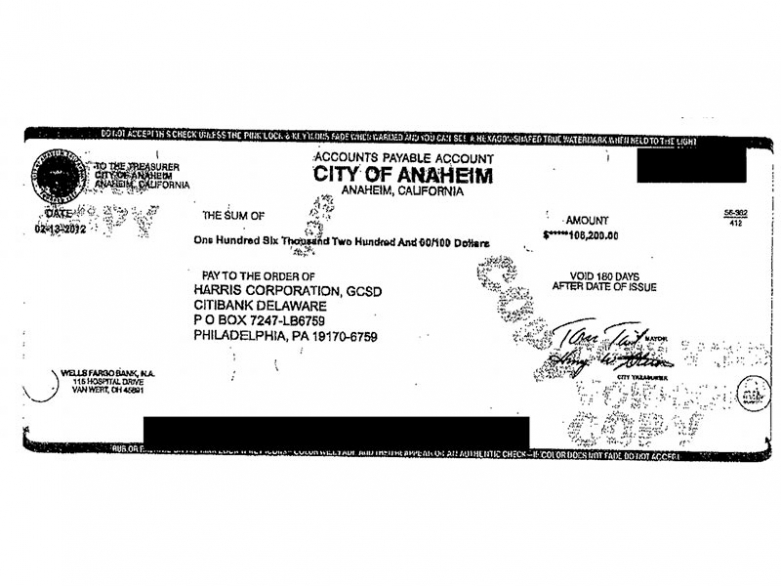 Today, we are releasing the complete set of documents that a court ordered Anaheim to release. Those documents show that Anaheim used a little-known “covert purchase” procedure to hide acquisitions valued at approximately $700,000, loaned its surveillance equipment out to jurisdictions all over Orange County and neighboring Riverside County, and claimed it would use the devices to catch “terrorists” when in fact they were later used to investigate a much broader array of crimes.

After more than two years of litigation, a court finally ordered Anaheim to remove many of the redactions in the documents we requested. The information shows Anaheim’s obsession with secrecy, and its troubling effects.

In March 2015, we sued Anaheim for records about cell site simulators, often referred to as “Stingrays.” By mimicking a cell tower, the device tricks nearby cell phones—not just a single targeted device—into communicating with it, and thus scoops up information from innocent bystanders. Using these covert devices, the government can learn where a person is located, even if they are in the privacy of their own home.

Anaheim initially refused to provide any information, and then only after we sued did it produce a heavily redacted set of documents.  Those records showed that the small city of 350,000 people, home to Disneyland, had acquired a cell phone surveillance arsenal that could be deployed to invade the privacy of the area’s residents and visitors (the Magic Kingdom hosts 16 million people each year).

Anaheim purchased a cell site simulator from a company called DRT in 2009 for $239,000; a newer model from Harris Corporation in 2011 for $337,697; an upgrade to its Harris device in 2013 for $107,768; and yet another device from another company KEYW in 2013 for $9,728. Police spent all this money out of public view and without engaging in a open debate over the ongoing costs or potential civil liberties impact of the program.

But the secretive actions of the Anaheim police department didn’t just impact Anaheim. The city loaned out its spyware to jurisdictions all over Orange County (pop. 3 million) and even neighboring Riverside County (pop. 2.2 million). Residents in these counties didn’t get the chance to object – instead, a few administrators in Anaheim made closed-door decisions that affected the privacy of 5.2 million people all over Southern California.

And although Anaheim police initially claimed they would use these surveillance devices to “apprehend terrorists,” in practice they deployed them for everything from armed robbery to grand theft. The police could easily find new applications for the tools – leading to more data collection and potentially raising new privacy and free speech concerns – without worrying about pushback from residents, who were left in the dark.

Maybe the public would have been fine with Anaheim acquiring these devices, and using it all over Southern California for ordinary, non-terrorism related crimes. But Anaheim Police never invited the public to weigh in on these important decisions.

All of these acquisitions—amounting to almost $700,000 worth of surveillance equipment—were made as “covert purchases” under a program that allows the police department to shield its purchasing activity from the public, and prevents Anaheim residents from learning basic information about how police are spending public resources. This invites misuse of funds and of invasive surveillance technology (in fact, Anaheim was so “covert” that it couldn’t even find its own contracts).

Anaheim’s residents deserve better. They deserve to know more about how their police acquire and use surveillance technology. Anaheim communities deserve more control over whether police use surveillance and greater accountability for the police.

In Oakland, for example, residents have pushed forward with a local ordinance that would require transparency and oversight for cell phone and other tech-based surveillance. Similar measures have been passed around the country. And last fall, Oakland voters overwhelmingly approved creation of a civilian police commission empowered to investigate and discipline officers for misconduct, set policy, and help hire and fire the police chief.

Anaheim needs similar measures. Following an outpouring of protests and community concern over police shootings in 2012, the Anaheim City Council established a pilot community board to review the Police Department budget and critical use of force incidents. But that body lacked authority to issue findings on deadly uses of force, much less to to approve or disapprove the acquisition of surveillance technology.

Fortunately, Anaheim residents are engaged in a campaign for meaningful civilian oversight with independent investigatory power and the ability to deliver formal recommendations to the City Council. Stronger oversight of the Police Department should also encompass broader influence over the public safety budget to inhibit hidden surveillance technology.

By taking a stand against the secret purchase and unaccountable use of surveillance technologies, local residents can avoid the surveillance mistakes made by Anaheim. This is essential to protecting vulnerable community members from surveillance abuse. And it makes our democracy stronger.

Linda Lye is a senior staff attorney with the ACLU of Northern California.