Together We Can Put a Stop to High-Tech Racial Profiling 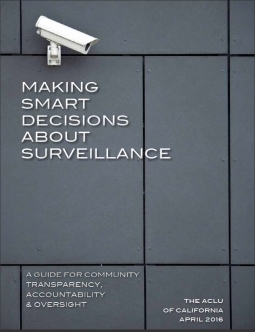 Update! (April 15, 2016) Yesterday, after nearly a year of input from county stakeholders and community members, the Santa Clara County Board of Supervisors took an important step towards the passage of an ordinance that would ensure transparency, oversight, and accountability for surveillance technologies. The proposed Surveillance Ordinance, which passed through committee and is now headed to the full board, enables elected leaders to ensure that smart decisions about surveillance technology are made in Santa Clara County. San Jose's secret acquisition of a drone, the Santa Clara Sheriff's attempt to quietly buy an invasive cell tracking stingray device, and revelations that Fresno and Bay Area police departments have been using social networking software that monitors Black Lives Matter activists all underscore the need for this ordinance. Thoughtful and inclusive decisions about surveillance technology are key to protecting the rights of community members and the responsible management of public resources. This is a strong step in the right direction.

Discriminatory government surveillance is nothing new. As many people know all too well, American law enforcement has a long history of spying on and racially profiling communities of color. This week, we’re attending the “Color of Surveillance” conference in Washington, D.C., meeting leaders and activists from across the country who are shining a light on discriminatory surveillance.

When technology advances, the tools of surveillance change but the color of surveillance remains the same. Here in California, we’re seeing communities fighting back against the secretive purchase and unaccountable use of surveillance technologies like Stingrays, license plate readers, and social media surveillance software.

In Fresno last year, an ACLU of California records request revealed that the police had secretly acquired and tested multiple social media surveillance tools that encouraged surveillance of hashtags like #BlackLivesMatter, #dontshoot, and #wewantjustice and assigned individuals a “threat level.” This revelation sparked nationwide press attention and local activists such as Faith in Community pushed for change. This pressure forced the police to apologize and dismantle the harmful program.

In Santa Clara County, county officials refused to sign off on the purchase of a Stingray, a cell phone surveillance device that collects the location and identifying information of surveillance targets and bystanders alike. The county rejected the proposal following its discovery by community members, who alerted the Board of Supervisors about the plans and raised concerns. In an effort to prevent future secret purchases of surveillance technology, the Board introduced and is debating a comprehensive surveillance reform ordinance.

In San Jose, the police purchased a drone without looping in the public, hiding the purchase plans at the end of a long city council budget proposal. After the purchase came to light, we joined local activists from CAIR and the Coalition for Justice and Accountability to demand public hearings, which forced the police to apologize and place the plans on hold while it hosted town hall meetings.

In Oakland, local activists uncovered plans for the massive Domain Awareness Center, which would have connected surveillance feeds from across the city into one sophisticated monitoring center. After privacy activists, religious leaders, and the ACLU raised concerns about racial and religious profiling, the City Council rolled back the project, gave residents control over its privacy policy, and created a privacy committee that will now write a comprehensive surveillance ordinance for the city.

The ACLU of California is working with community groups up and down the state to speak out against discriminatory surveillance and its effect on people of color, activists, and the poor. Our guide, Smart About Surveillance: A Guide for Community Transparency, Accountability, and Oversight, is meant to be a useful resource for people who want to stop high-tech racial profiling and make sure community voices are heard when decisions about surveillance technologies are being made.

The guide provides a set of questions local residents and leaders should ask and answer about surveillance proposals. It also includes dozens of case studies highlighting smart approaches and missteps to avoid and contains model language for policymakers to adopt to make sure the right process is consistently followed every time a surveillance proposal is considered.

Unchecked and discriminatory surveillance is not a new problem, but this is a unique and important moment for action. In recent decades, the government has sent billions of dollars in grants down to local police to buy invasive surveillance technologies. Communities have been largely kept in the dark and surveillance has been expanding without limits and safeguards for rights. Our 2014 survey of California communities found that only 15% had publicly debated new purchases and only 1 in 5 surveillance programs had any policies to protect against misuse.

And Californians do want public control of this technology. Recent polling revealed that two thirds of California voters want to see democratically elected officials like city councilmembers or county supervisors approve new surveillance technologies before they can be used. A strong majority also want to require that law enforcement notify the public before they get new surveillance technology, and publicly report how often they use it once they’ve acquired it.

The sunlight is starting to shine. Law enforcement is getting the message — unchecked surveillance and racial profiling will not be tolerated. Communities across California are taking back control, adding fuel to local surveillance reforms in other states as well as congressional efforts to reform digital privacy law. But there’s still so much work to be done. Join the fight by using the ACLU’s ready-to-go guide for surveillance reform, available here.